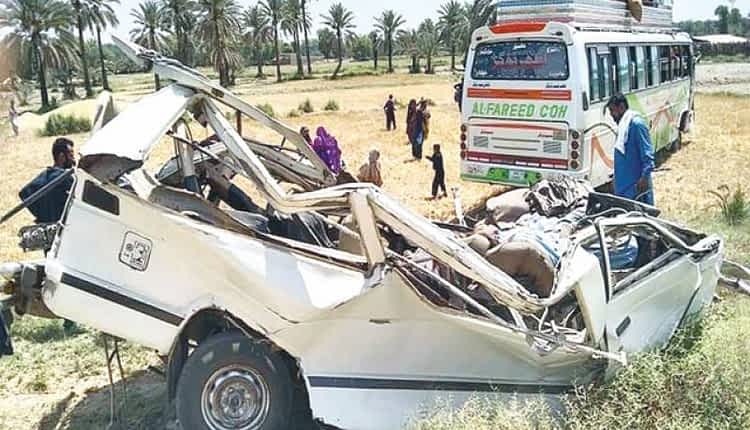 KHAIRPUR – As many as 14 people, including women and children, were killed and 23 others injured in a collision between a coach and a van within the limits of Kotdiji police station near Khairpur Mirs on Wednesday.

A Tharimirwah-bound van collided with a coach going to Sanghar from Sukkur on the old National Highway in Hussain Abad locality within the limits of Kotdiji police station near Khairpur Mirs. As a result, 12 people, including women and children, were killed on the spot and 25 others injured, some of them seriously. The van was completely damaged due to massive collision. The dead were from van while injured were from the coach and the van. Those killed were identified as Waseem Shar, Ali Dino, Ali Sher Shaikh, Dad Mohammad Rajar, Sajid Ali and others.

The injured include Hubdar Rajar, Abdus Sattar Wasan, Ayan Marri, Sakina, Sanaullah, Ghulam Hyder and others. The victims belonged to Bandhi, Garhi Yaseen, Thari Mirwah and other areas of Sindh. Emergency and rescue teams reached the accident site and shifted the victims to Civil Hospital Khairpur and Talula Hospital Kotdiji, where two other injured expired. The police have arrested the coach driver and have started a probe into the incident.