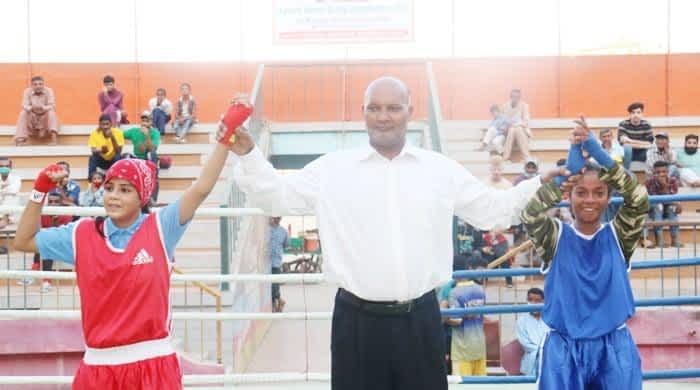 The referee raises the hand of the boxer who has won the bout in the boxing ring, in Karachi, on November 24, 2020. — Photo buy author

KARACHI: Aiming to make a mark in boxing rings, 47 boxers from various parts of Karachi — aged 14 to 20 — are participating in a two-day Karachi women boxing championship.

The event has been organised by Sindh Boxing Association in collaboration with District Municipal Corporation South of Karachi. Boxers from Karachi’s South, West and Central districts are participating in the event.

On opening day of championship, 15 bouts were held in which enthusiastic female boxers displayed the fierce power, skill and passion to achieve something.

“This championship is first step for them to achieve their dreams to do something for the country,” said Asif Azeem, the organiser of championship.

And, what the dream is for these girls?

“To win medals for Pakistan in all international events,” responded the girls.

Two young boxers battling it out in the boxing ring, in Karachi, on November 24, 2020. — Photo buy author

“We can be like Laila Ali, Marry Kom or any other top boxer, if they can do it, why can’t we?” said a boxer participating in the tournament.

Boxing was once one of the fast growing sports in Pakistan but in the last few years, the sport has faced a decline due to lack of interest and usual-politics at the helm of affairs in the Boxing Federation.

“It is good to see girls getting interested in boxing, it is not just a sport but can also help them in self-defense. They have role models in likes of Mehreen and Razia who’ve made the country proud,” said Asghar Baloch, the vice president of the Pakistan Boxing Federation and a renowned boxing organiser.

Two young boxers battling it out in the boxing ring, in Karachi, on November 24, 2020. — Photo buy author

“We have around 100 girls in our pool at this moment but we are making efforts to increase this number as our target is to have at least 1,000 girls playing this sport. In Karachi, Lyari has a good number of boxers and there are girls from Balochistan and other parts of the country coming forward as well,” he said.

Asghar added that championships at the grass root level will help not only in improving the standard of the game but also in promoting the game of boxing among the masses.

Rates to remain same till December 15