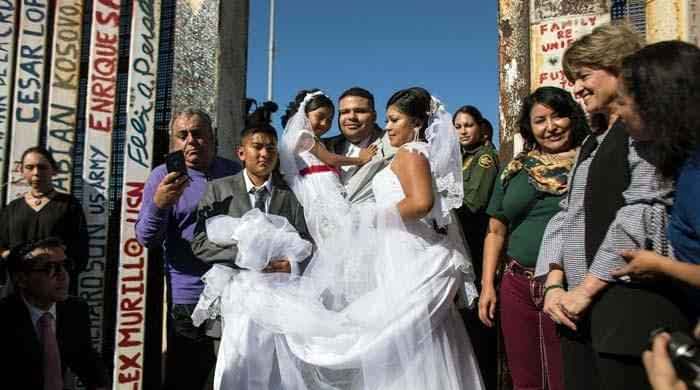 TIJUANA: Proving that love knows no boundaries, a Mexican woman and a US man meet at a gate that has been briefly opened in the fence separating their countries to exchange marriage vows.

The US Border Patrol opened the gate at Playas de Tijuana, known as the ‘Door of Hope’, for one hour on Saturday, allowing quick meetings for friends and relatives from both sides.

In the crowd on the Mexican side was Evelia Reyes, who arrived wearing a white wedding dress, a long flowing train and a white veil.

She was accompanied by three children from her previous marriage, including a young daughter also dressed in white.

“For a relationship this wall does not exist, for love there are no borders,” Reyes gushed.

At the gate a Mexican judge promptly married her to her groom, Brian Houston, who approached from the US side dressed in a smart grey suit.

The wife of the mayor of Tijuana and the local Mexican Human Rights commissioner served as witnesses.

Reyes, a native of the southern Mexican state of Guerrero, said she met Houston in Tijuana three years ago.

Lacking immigration documents she could not travel to the United States — a problem likely to be solved with the marriage.

The San Diego Tribune newspaper said that Houston, a US resident, could not visit Tijuana for reasons he would not elaborate.

The crowd gathered at the gate under the watchful eye of US Border Patrol agents.

The Door of Hope event was organized by the Border Angels, a immigrant rights advocacy group.

Its director Enrique Morones said there was just enough time at the event for 12 families to reunite.

“These families can be together only for five minutes, it´s the saddest thing to see,” he said.

But President Donald Trump has promised to build a wall along the entire frontier, straining relations between the United States and Mexico.