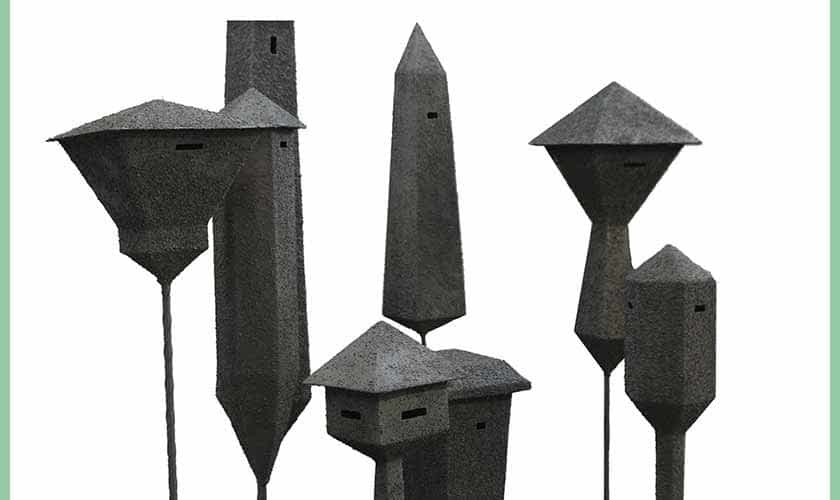 After the age of prophets, it was artists who started performing miracles. These are not of the same nature, like turning sticks into snakes, walking on water, or bringing the dead back to life. Instead, they are related to morphing the existing reality into a believable scenario or turning an imagined scenario into a familiar reality. Seema Nusrat, an artist trained in sculpture, demonstrated this feat during the 2nd Pioneer Canvas Residency at Khushab in the early spring 2018.

At the living compound of that artists’ residency, there was an abandoned watch tower next to the boundary wall, a modest security structure that had long ceased to be functional.

Seema Nusrat transformed that lifeless structure into a colourful quarter, mimicking middle class houses from the area. Using similar architectural detail, choice of colours, gaudy decorations and mixing of styles that one encounters in villages and small towns in the Punjab – perhaps across Pakistan, Nusrat blended the home and watch tower to the point of making them inseparable.

The opposite of what Nusrat did in Khushab is now occurring in our midst. Private as well as public buildings in every city across Pakistan have changed over the past few decades. One can still recall houses in crime-ridden metropolises featuring low outer walls or a hedge instead of a brick or stone partition. It was only after terror struck Pakistan that our civic landscape was altered, bit by bit, but never entirely.

People started by erecting boundary walls, later added more material to those, then fixed iron railings on top of those and finally added barbed wires. Sand bags were stacked next to the buildings. Entrances were barred. Windows were bolted. Any precaution one could imagine and manage was taken.

Still, some of those buildings were targeted, public places were hit and the security arrangements were challenged; so that these measures – from neighbourhood barricades to road barriers, body searches to metal detectors and security checks to walk through gates – proved futile. Once introduced, the safety devices became part of our routines, then mere rituals. We encounter them, almost the way Faiz Ahmed Faiz says: Dil say mil aatay hein bas rasm nibhanay kay leiay, to follow the custom. These rituals are so ingrained in our urban reality, that if you happen to step into a building that requires no body search, has no barriers, no metal detectors, no screening machines and no security guards, you get frightened and are reluctant to enter.

We are now conditioned to live in – and love the cage. In Seema Nusrat’s new works – from her exhibition, the Brave New World (November 17-26, Canvas Gallery, Karachi) one sees the reality of a ‘safe world’. The artist, in the past created composite (segments of) buildings/houses – like pages of a diary or notebook, but her recent works reveal a new aspect of our socio-political existence. In this a citizen is a consumer of the product called ‘terror’.

The artist, in the past created composite (segments of) buildings/houses – like pages of a diary or notebook, but her recent works reveal a new aspect of our socio-political existence in which a citizen is a consumer to the product called ‘terror’.

Seema Nusrat maps the situation in the series Future Facades (screen-print on acrylic sheet, 2020). In these images, edifices are barricaded – completely covered in patterns; and colours of road blocks (as well as speed barriers, zebra crossing). The viewer realises that these are not about the current state of security, but indicate the way state invades personal spaces/acts, such as living, walking, interacting; and how power takes over on the pretext of protection.

These works – rightly named Future Facades – demark buildings which have nothing but barricades, or skylines covered by patterns that promise state security. Houses are completely concealed with a stark motif/colour scheme. The entire city is reduced to two official hues. In these pieces, you find great detail vis-à-vis metal grills, levels of a structure, vegetation, columns and other elements of architecture, all translated into areas of yellow and black. The combination reminds one of cordoning off of an accident or crime site.

Nusrat negotiates between the space of actuality and dystopia. Her works appear as pictures of future houses besieged by security. Like the past – the future is a fictitious term/tense. What we imagine to be the future is merely a projection of the present. In Nusrat’s art you see this idealised scenario. It is a comment on contemporary existence.

She sketches the next stage of contemporary conditions, a phenomenon not delinked from the current practice of concealing faces with masks. Features and facades are covered to avoid assault from an unknown foe: medical diseases or societal ailments, both of which spread beyond national borders and are quite uncontrollable. Both hit innocents without any warning or reason.

Nusrat’s other body of work, from her latest exhibition consists of totem type pieces – a blend between a watch tower, a hood, a chimney, top of a house. These, 26, metal objects covered with gravel and deco paint stand like human beings. Mostly due to their proportions, with long sticks ending on small bases, in their aesthetics, these are close to Alberto Giacometti’s figurative compositions. Given their context, however, these signify an atmosphere of surveillance. Each piece has one or two tiny slits at the top – openings to observe, hence the title Observers. These sculptures also recall Afghan burqas, which made Margaret Atwood comment (after her Afghanistan visit in 1978, a journey consequential in writing her celebrated novel The Handmaid’s Tale) that “Every writer wants the Cloak of Invisibility – the power to see without being seen”.

Although the upper part of these sculptures is a geometrical construction, a visitor is likely to take them as observing individuals because of openings for eyes. The act of putting observers on display, makes them vulnerable to the spectators’ gaze. Establishing an unequal bond between the observer and the observed – blurring a distinction among the two. This piece of work examines the idea of scrutiny. A higher body scanning you, is concealed, unrecognisable, mechanical (read methodical). Thus it becomes cold, neutral and cruel.

A combination of these elegant ‘figurines’ reasserts the existence of observers that may be invisible but not invincible. We are being watched regularly, not by our concerned (but bored) neighbours, but by supreme authorities: states and big businesses, who tab all our surfing when we are on our smart phones, tablets, and laptops. This is a bleak rendering of the new world.

Margaret Atwood, while talking about the popular sentiments after the fall of Berlin Wall in 1989 and the end of Cold War, admits: “How wrong we were about the brave new world we were about to enter.” In the same vein, Seema Nusrat draws and documents a frightened, frozen condition mistaken as ‘brave’, ‘new’ and ‘world’.

Find out Sara Ali Khan, Varun Dhawan's solution to 'all your sorrows'