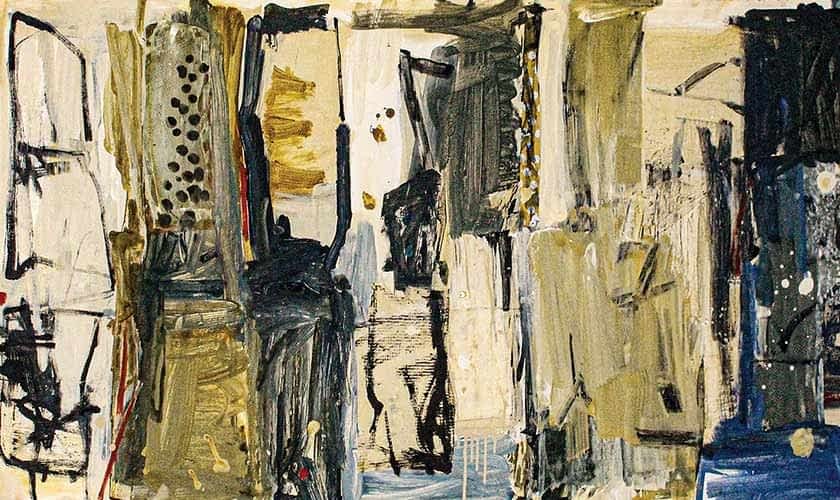 If colour could only paralyse the viewer’s mind and imagination, it is here. Think of the opposite sensation. Of colours sombre, soft, so filled with angst that it could be a “bleeding piece of heart.” This is Shireen Kamran. In terms of colour, this is a sensation that is resonant, far from impulsive art. What matter are the qualities of paint and the art of painting itself. Kamran’s identity of abstraction is the artist expressing herself via colour and formlessness born out of the contemplated idiom. We are given the landscape or the mindscape by Kamran as concrete emotions. This is not enthusiasm; but there is introspection and self-freedom. Kamran’s work is neither spectacular nor demonstrative. It doesn’t shout; it whispers, and then falls silent. The silence in her art, within the works and between them, is not unlike our own calculated gulfs of silence, into which we fall and reveal ourselves, even as we resist.

It is clear that she likes to play off strong accents against delicate rendering, adroitly manipulating these strategies to set up arhythmic exchange. The moody lyricism of her images can suggest tranquility as swiftly as it can anxiety; it negotiates a formal counterpoint between balance and disturbance, integrates fragments of composite and contradictory cohesions only to set them once more adrift. You look for signs to see if her pain is palpable. Tensions are created on the surface, and then intentions and dichotomies break cover. As the paint is banked down or piled up, or stroked in brisk staccato bristles, a mystery of infinitude develops.

In her life practice, Shireen Kamran has cultivated a singular vocabulary of abstraction and landscape. The conceptual grounds of the oeuvre that went on show at Canvas Art Gallery in Karachi as Hiatus remain in dialogue with laws of the universe, the cyclicality of time as well as a manifest relatedness between human beings and the webbed fabric of ecology. This painterly world is textured with knowledge references that the artist has attuned to over a period of time – from realms as diverse as archaeology, ancient architecture, art history, sacred philosophy and poetry.

The Lebanese American writer-poet and painter Etel Adnan reflects: “When you speak of transformation, you have a combination or contrast of a substratum – something that is permanent and something that changes. There is a notion of continuity in transformation.” It is this foundational continuity in the artistic journey as a transformative process that is revealed in Kamran’s latest body of paintings – tracing a steady pictorial lexicon as the bedrock of experience yet enabling a renewed quality of transcendence, like a view outside the window or an undulating walking trail. The continuity is also borne of technical choices – the artist has persisted in working with mixed-media since she began to paint.

Through landscapes and cityscapes bearing resonant forms in lines, elemental shapes and dots, the artist maintains a consciousness around the geometric symbolism and symmetries held within nature. At times, the transformation of seasons plays out in these lively surfaces – from spring fever, a passage of wind currents, to the gathering of rain clouds, all becoming intimately conveyed in the sense boundaries of Kamran’s palette.

In the artist’s words, “The signs of sound, touch, smell and shades of colour that emanate from a forgotten incident create an instant marker in the mind creating an emotive spirit. The mind holds on to that and finds a release in the act of painting. Painting soaks us in this spirit.”

It is this foundational continuity in the artistic journey as a transformative process that is revealed in Kamran’s latest body of paintings – tracing a steady pictorial lexicon as the bedrock of experience yet enabling a renewed quality of transcendence, like a view outside the window or an undulating walking trail.

Crooked trees entwine around a field of crops, while an eclipsed moon rests upon bare branches. Indian red and leaf green borders are marked on either side of the painting; these ways of framing the landscape are reminiscent of traditional scrolls and Basohli-style paintings, and often remind one of Howard Hodgkin’s abstracts inspired largely, by his own admission, by the Indian miniature. Some works appear tactile in their composition, providing a sense of dimensionality to the backdrop and detailed foreground: flowers with bending stems that appear as still life subjects of a Giorgio Morandi painting; tantric symbols float upon an ochre pigment ground. They meet an inverted mountainside, minuscule wave formations – and then the ground becomes a garden. Licks of blood fire and white sails are impressed into an earthen scene that resembles how earth tones transform with the passage of time. In another painting, moving lines open up to a terrestrial gradient of soil, shattering the linear gaze into a circulation. In the meditative spatial density of Kamran’s recent works there is still the quiet comprehension of the philosophic condition of formlessness.

Some of the earth shades exposed in the artist’s work allude to the contours of baked clay. In fact, the artist’s home and studio remain filled with collections of clay figurines and wood crafted objects that compose an archive of living traditions. These cultural artefacts expose Kamran’s cultivated understanding of how modernist idiom remains uniquely connected to artisanal vocabularies and vernacular knowledge from across the subcontinent.

Across her painterly work, especially in the past decade, rhythm construction becomes strongly manifest as Kamran’s strokes begin to appear as score lines for a song composition – with secret scripts that appear to settle upon azure patches and golden yellow ripe meadows. These are Kandinsky like, where colour flows resonate as visual chords and elicit synesthetic encounters.

Shireen Kamran has cultivated a sensorial practice of seeing, which considers that the unknown element is inevitably encompassed in the composition of the known – like hidden galaxies that remain beyond calculation to the human eye, but nevertheless light up the celestial skies. This artist charts terrains of the sensed, rather than remaining controlled by a frontier of directly consumable reality. Thus, she builds image constellations as a limitless space. There is no way to remain unmoved in the company of Kamran’s paintings; they present a complex structure of feeling and planetary belonging within the dark vulnerability of our present.

There is no grandeur here in these landscapes or mindscapes – there is only a spiritual quietude that propels itself into the extension of the self that retracts from the universe, to find another world. A world that diminishes the desire for external alacrities and multiplies the quest for transcendentalism. For Shireen Kamran, this desire is propelled by an overriding sense of mingled vulnerability to the outer world that results in the magnification of both curiosity and abject desolation.

The dialectic between the inner and the outer world is not the only one mediated in these paintings: Kamran’s landscapes are like mappings that reverberate with a series of adjacent assimilations and associations. This is moody lyricism at its best, like the sunset that swathes the sky in its tenacity of multi-coloured hues; it is the torrent of darkness that creeps into the shades of trees; it is the ghostly galleon that vanishes from sight when the cloud of anxiety disturbs its very entity. Silent devotion for Kamran does not merely mirror a day, it is life in itself; it is the sunset of expectation that has drowned in the abyss of destiny. This is why the silent devotion becomes the negotiator.

The writer is an art   critic based in Islamabad