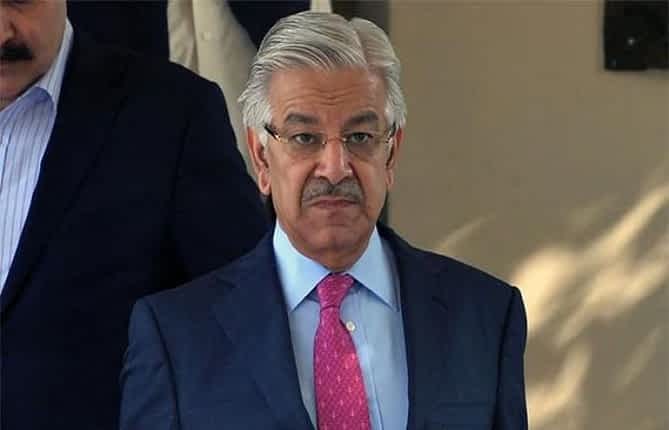 The anti-corruption watchdog sought transit remand of the politician which was approved by the court besides directing to produce him before the concerned court tomorrow. The judge directed concerned authorities to transfer the accused to Lahore today or tomorrow.

During the hearing, Asif’s counsel opposed the NAB’s plea seeking his transit remand and demanded the accountability court to order the immediate release of his client. However, the court rejected the plea of Asif’s counsel.

Earlier, while talking to journalists, the PML-N lawmaker claimed that NAB has not yet initiated interrogation from him. Asif said that he was given a charge sheet by the anti-graft watchdog for possessing assets beyond income.

He alleged that the government is attempting to weaken the stance of Nawaz Sharif and trying to split the political party into different factions.

The accountability watchdog had claimed that Asif could not furnish a satisfactory response on his possession of assets amounting to Rs260 million.

Asif had been arrested as soon as he left Iqbal’s place following a party leadership huddle which was attended by Maryam Nawaz Sharif as well, sources told ARY sources.

Khawaja Asif had been kept at NAB Rawalpindi’s office after he underwent a medical examination.

NAB officials had confirmed that the arrest was sanctioned by Chairman NAB Justice retd Javed Iqbal himself after he could not convince the three-member committee of NAB investigation on how he made assets that do not conform to his means of earning.

Pantone announces colour of the year for 2021

Nawazuddin Siddiqui sheds light on what helped him achieve success