Ahead of Ramadan, essential commodities witness stark rise in prices 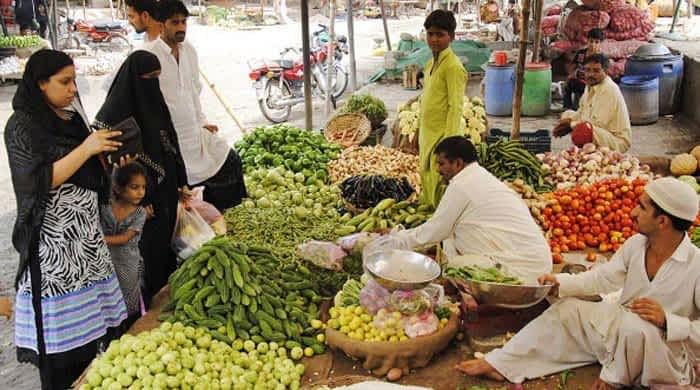 People can be see purchasing vegetables in this file photo.

People’s hardships have increased following a stark increase in the prices of essential commodities ahead of Ramadan, Geo News reported Saturday.

After the rise in prices, 1kg sugar is available for Rs105 in Karachi. Chicken is being sold for Rs450 a kg, cooking oil is retailing at Rs280 per litre, while the prices of pulses have also witnessed an increase.

Similarly, the prices of sugar, chicken, fruits, vegetables, and other essential items have also moved up in the capital city of Islamabad.

In Gujranwala, the price of goat meat has gone up to as high as Rs1,200 per kg, as compared to its earlier rate of Rs900, while the rate of chicken meat has shot up by Rs25 per kg.

Meanwhile, in Peshawar, prices of fruits, vegetables, and pulses have increased on average by Rs10-15 per kg.

In Multan, the prices of sugar, ghee, fruits, and meat have also gone up in the last week.

Speaking to Geo News, citizens said due to an increase in the price of the essential commodities, they are in a dilemma over what to buy and what to forego.

Shopkeepers, on the other hand, said the prices of essential commodities were moving up as the supply has reduced.

The Federal Bureau of Statistics, in its weekly inflation report released Friday, said inflation had reached 15.35%.