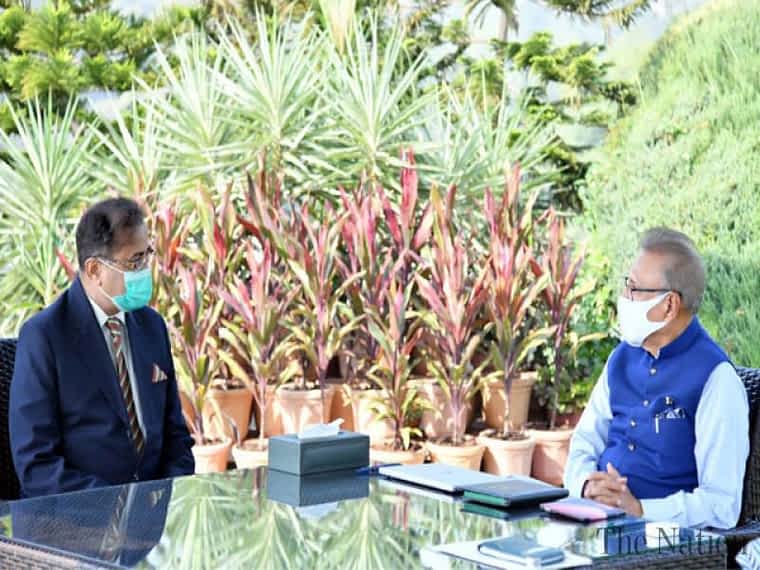 ISLAMABAD-President Dr. Arif Alvi on Tuesday said that with the present government’s vision of the establishment of Riasat-e-Madina, Pakistan was moving towards the renaissance of Muslims in line with the philosophy of Allama Muhammad Iqbal.

“There should not be any taunting about the establishment of Riasat-e-Madina, as it is the voice of everyone’s heart including me and you,” he said while addressing an event titled “The Vision of Iqbal: Ambassador’ Conference” here at the Aiwan-e-Sadr.

The president said that despite the propaganda of enemies, some brave leaders in the Muslim world including Prime Minister Imran Khan stood firm on Muslims’ Renaissance through the ideals of peace, harmony, unity and coexistence as per the vision of great thinker and poet Allama Muhammad Iqbal.

Recalling the historic 1930 address of Allama Muhammad Iqbal in Allahabad, he said the current situation of minorities’ exploitation in India  were reflective of what Allama Iqbal had viewed about the two-nation theory and the creation of a separate homeland for Muslims of the subcontinent.

The president said that as the vision and poetry of Allama Iqbal was universal with focus on Muslims’ Renaissance, he was the poet of Ummah.

Recalling the formation of Pakistan Tehreek-e-Insaf (PTI) over two decades back, President Alvi said, since Prime Minister Imran Khan was inspired by the thoughts of Allama Iqbal, they then had decided that their government should be on the model of the State of Madina.

He recounted various political, intellectual and philosophical achievements of Allama Iqbal including his efforts for the creation of Pakistan.

The president said that Allama Muhammad Iqbal, like the founder of nation Quaid-e-Azam, was initially supportive of a united India but later after realising the psychology of Hindus, who wanted their dominance, gave the idea of a separate Muslim state and started political efforts to achieve the objective.

Minister for National Education and Professional Training Shafqat Mehmood while speaking on the occasion said that Allama Muhammad Iqbal besides other things also addressed the youth and highlighted the importance of education.

He said the present government was working hard for the promotion of education and for the first time introduced a national curriculum in the country.