Anger in India after toilet water used for train tea 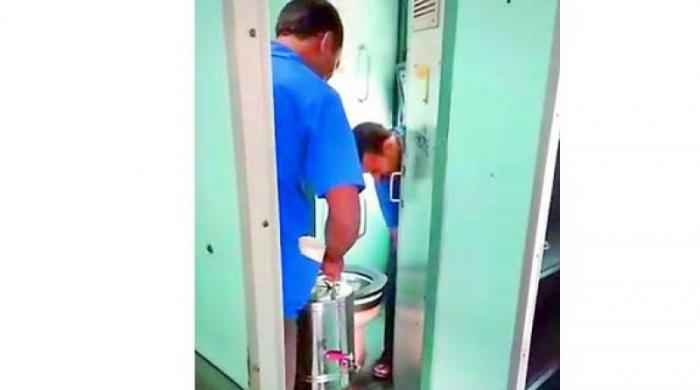 Kolkata: An Indian tea vendor caught on video taking water from a train toilet before selling his drinks to passengers has been fined amid heightened concern in India over food safety.

The vendor on the Chennai-Hyderabad Express was caught after footage of him and two others coming out of a toilet with large cans used to serve tea and coffee on Indian trains was widely shared.

Indian Railways said in a statement that the “incident has been inquired into in detail” and that the tea seller had been fined the equivalent of $1,500.

The video was made on a train at Secunderabad in Telangana state. Out of the three vendors seen only one was licensed.

The vendor claimed the group were transferring milk from one can to another and did not want to do it in the open.

“The very fact that tea/coffee cans were seen being brought out of the toilet, is in itself a wrong practice,” the railway company said.

A series of recent incidents have put the spotlight on food safety in India.

In the eastern city of Kolkata, famed for its Bengal delicacies, police this week unearthed a racket in which tonnes of rotten meat from dumps was being sold to restaurants.

Sales of meat and poultry in the city have plummeted since authorities seized about 20 tonnes of rotten meat. Police suspect a lot more had been sent out to city restaurants.

“The meat was sourced from dump yards where vultures, dogs fight over carcasses in the fringes of the city,” Koteshwar Rao, a senior West Bengal police officer told AFP.

Eight people have been arrested so far. But Kolkata restaurants and cafes have been left reeling from the scandal.

“The rumours have resulted in a 50 percent fall in demand (for meat) across restaurants and eateries,” Taher Ali, a member of the Meat Merchants Association told AFP.

The Hotel and Restaurant Association of Eastern India has told its members to only purchase meat from registered suppliers.

According to government figures, food poisoning is one of the most common disease outbreaks in India, accounting for 242 of 1,469 reported serious outbreaks last year.

Has Nicole Poturalski, Brad Pitt’s romantic journey come to an end as she reunites with husband?