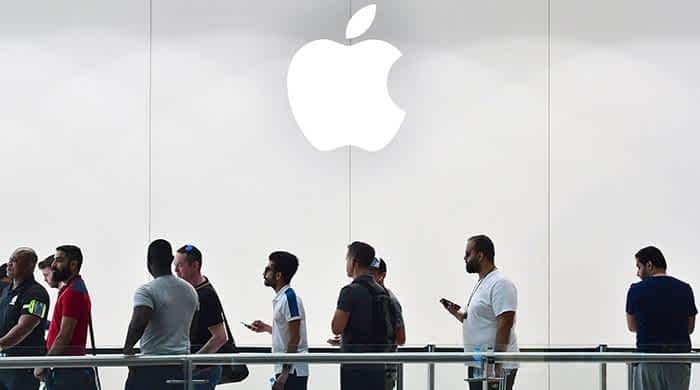 Its renewed push into India comes as Asia’s third-largest economy has hit a record slump due to a months-long coronavirus lockdown. — AFP/Files

MUMBAI: Apple said Friday it will launch its first online store in India next week, in a bid to cash in on New Delhi’s festive season and grow its tiny share of the booming market.

The company is a small player in India, where sales of its smartphones lag those of South Korean rival Samsung, with the iPhone maker pricing itself exclusively at the luxury end of the market.

Its renewed push into India comes as Asia’s third-largest economy has hit a record slump due to a months-long coronavirus lockdown.

India’s busiest shopping season usually kicks off in October, with stores offering steep discounts and freebies to customers looking to splurge on big-ticket items as they celebrate popular Hindu festivals including Dussehra and Diwali.

Apple’s online store, which will open for business on September 23, will offer “a range of affordability options” including discounts on Macs, iPads and tech accessories for students, the company said in a press release.

Shoppers will be able to get their AirPods, iPads and Apple Pencils engraved in English, Hindi and a range of other Indian languages.

Apple currently sells through third-party retailers in India including Amazon, and the country is seen as a huge potential market for the firm due to its giant 1.3-billion population and relatively low number of smartphone owners.

The company has only a two-percent share of the Indian market, according to industry estimates.

An application to open Apple Stores in India in 2016 was reportedly rebuffed because of a rule that states foreign retailers must source 30 percent of their products locally.

New Delhi has since relaxed the rules, giving companies up to eight years to meet the sourcing requirements, as part of a push to attract foreign investment and create jobs.

Some of its smartphones, including the iPhone 11, are assembled at facilities operated by Taiwanese manufacturers Foxconn and Wistron in the southern Indian cities of Chennai and Bangalore.