Arzoo declared a minor, sent back to shelter home 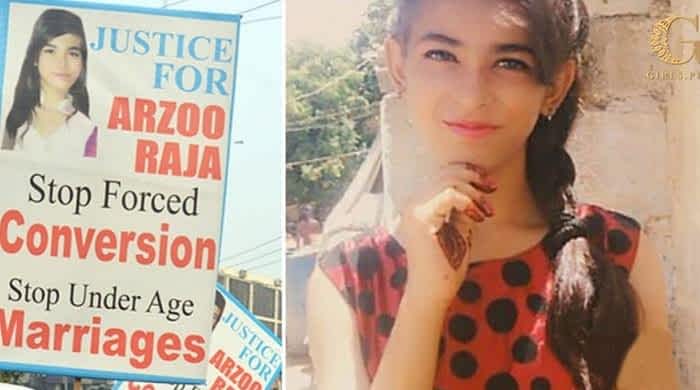 The Sindh High Court (SHC) on Monday ordered that the Arzoo Fatima case is to be investigated in accordance with the child marriages restraint act after a medical board declared her a minor.

Arzoo had converted to Islam and married a man almost thrice her age. The SHC order came on her petition seeking a court injunction against her Christian family’s attempt to get an FIR registered at the Frere police station against her husband and in-laws.

The court had constituted a special medical board to determine her age, which according to her family was 13 years. The five-member board estimated it to be between 14 and 15 years and nearer to 14 years, based on her bone ossification and physical appearance.

The SHC’s division bench headed by Justice Mohammad Karim Khan Agha asked Arzoo, who was brought in from the shelter home where she was being kept, if she was forced to convert to Islam.

The bench said that according to the record of the National Database & Registration Authority (Nadra), her date of birth is July 31, 2007, which shows her age to be 13 years. The court said that according to medical, Nadra and school records, Arzoo is under the age of 18, making it impossible for her to enter into a legally valid marriage with Ali Azhar under the Sindh Child Marriages Restraint Act, and so she cannot be allowed to go with him.

The bench said that prima facie (according to the first impression), an offence has been committed under the child marriages restrain act, so the IO should include the relevant section of the law and conduct a full investigation of the case.

The bench said clues can be found in the comments filed by Arzoo’s father that are on court record and include the names of those involved in the marriage in contravention of the law. Arzoo’s counsel Mohammad Ramzan Tabasum, however, pointed out that the marriage was conducted in accordance with the federal law and so it could not be declared

The court said that the issue can be taken up at another time at a more appropriate forum, where it can be decided if the federal law can prevail over the provincial law in view of the 18th amendment of the constitution.

The bench ordered the police to take Arzoo back to the shelter home, where she will be allowed to meet only those people who she wants to, except her husband.

The court ordered the IO and the chief of the Anti-Violent Crime Cell to inform the court about the development made in the investigation by November 23.

The SHC made it clear that no person should be protected in any way if they have violated the child marriages restraint act, and that after a proper investigation, action must be taken against those found to be in breach of the law.

The bench also warned the IO against harassing anyone during the course of the investigation, directing him to act strictly in accordance with the law. Arzoo had said in her petition that she converted to Islam of her own free will, adding that she asked her family to embrace Islam but they refused.

She said she married Azhar of her own free will and without any pressure, adding that she feared that her family was annoyed because of it and would register a kidnapping case against her husband and in-laws.

She also said she had already intimated the Frere SHO about her conversion and marriage after obtaining permission and affidavit of free will from the competent authority, but despite being duly received by the Frere police station official, her intimation was not acknowledged.

Her family, however, questioned the validity of her conversion and subsequent marriage because being 13 years old, she is not sui juris (of age), and produced her birth certificate to prove their point.