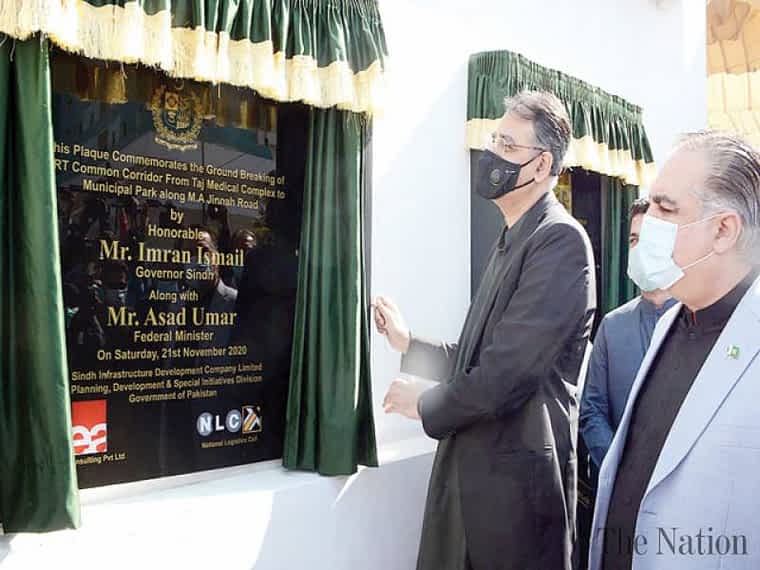 KARACHI – Federal Minister for Planning, Development, Reforms and Special Initiatives, Asad Umar on Saturday said that the Sindh government should utilise Rs700 billion that had been allocated in the provincial budget for the projects in Karachi.

He said this while talking to the media after unveiling the plaque to commemorate the ground breaking of BRT Common Corridor from Taj Medical Complex to Municipal Park along MA Jinnah Road.

The Federal Minister along with the Governor of Sindh Imran Ismail also unveiled the plaque to commemorate the opening of Grade Works of BRT Common Corridor Underground facilities at Naumaish MA Jinnah Road.

Asad Umar said that the people would be witnessing the Green Line on the roads in the middle of 2021.

He also appreciated Sindh Infrastructure Development Company Limited (SIDCL) and Planning Development and Special Initiatives Division for the hard work and dedication in execution of the Green Line project.

Speaking about the Karachi Transformation Plan, Asad Umar said that good progress was made on all the projects in Karachi for which the federal government was responsible and fast-pace work was underway on the K-4 project, two projects of railways, KCR and Freight Corridor from Karachi Port to Pippri. The Green Line project was in the last phase of its implementation, he added.

He said that work was also underway on the cleaning of drains in Karachi to permanently settle the problem of de-watering after rain. The encroachments were being removed in the initial phase of cleaning of nullahs for which the Sindh government had started work from Mehmoodabad area, he said.

As soon as the encroachments were removed from the nullahs, the Federal government would launch work on it, Asad Umar added.

Speaking on the occasion, Sindh Governor Imran Ismail said that the inauguration of the first mass transit project of Sindh would be performed between July to September 2021 and Prime Minister (PM) Imran Khan, as per his promise was expected to perform its inauguration in Karachi.

He said that fast pace work was being carried out on all the projects which had to be executed by the federal government in Karachi. The K-4 Water project was handed over to WAPDA. WAPDA would soon present its report to the PM in this regard, he added.

Procurement of COVID-19 vaccines will take some time: Asad Umar