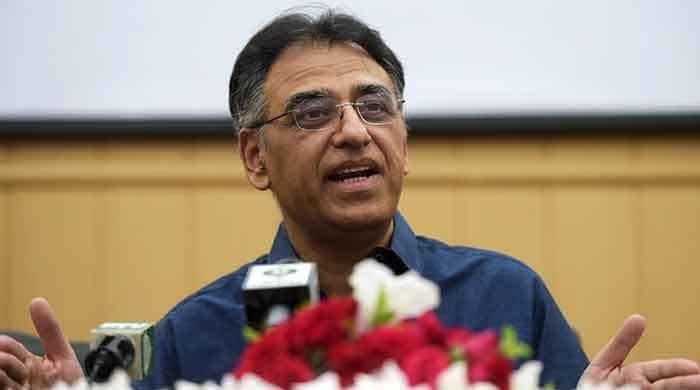 Chief of the National Command and Operation Centre (NCOC) Asad Umar on Sunday called on the nation to encourage all those aged 50 or older to get vaccinated at the earliest.

“Pakistan has [27 million] people who are 50 years or older. This age group is most vulnerable to serious health effects of COVID,” he wrote.

Umar said that so far, 5.6 million people or 20.6% of the people of this age group have gotten at least one dose of the vaccine.

“Please encourage all in this age group to vaccinate as soon as possible,” he urged.

Pakistan recorded the highest coronavirus positivity ratio at 4.09% in the last 24 hours since May 30, which was at 4.05%, according to the NCOC.

NCOC said that 1,980 coronavirus cases were detected from 48,382 tests conducted across the country in the last 24 hours.

Twenty-seven deaths occurred in this period, with the most recorded in Sindh followed by Khyber Pakhtunkwa.

Out of the 27 people who lost their lives, 16 died on ventilators.

NCOC chief warns there are signs of fourth wave

On Friday, Umar had warned everyone that there are “clear early signs” of the fourth COVID-19 wave starting in Pakistan due to poor compliance with standard operating procedures (SOPs) and the spread of the Delta variant.

Umar said that he had warned two weeks back that the government’s artificial intelligence models are showing a possible emergence of the fourth wave in July.

Umar expressed displeasure over non-compliance of the COVID-19 protocols and warned of shutting down the sectors not adhering to the directives issued by health authorities.

“Field reports are showing a complete disregard of the condition of vaccination for those attending indoor weddings and going to indoor restaurants and gyms. If the owners of these facilities do not show responsibility and ensure compliance, there will be no choice but to shut them down,” he tweeted.

PM urges use of masks, vaccination

A day prior to Umar’s warning, Prime Minister Imran Khan addressed the nation in a televised statement, urging the public to strictly observe the government’s mandated COVID-19 SOPs, especially on the occasion of Eid ul Adha, to keep the virus at bay.

“Even though I know that people are fed up of following the SOPs across the world and I understand that, I would again like to appeal to the masses to [at least] wear a mask at all times so that the country could be saved from the possible fourth wave of the pandemic.”

He explained that masks should be worn at all times whenever someone is in a confined space with other people — including wedding functions, restaurants, and rooms — because the chances of the virus spreading within indoor environments are extremely high.

“If someone is out in the open, for example in a park, they can take their masks off, but when they are inside a bus or a car with other people, for instance, they must wear a mask,” the premier explained while holding a mask in his hands.

“It’s a very easy job to wear a mask, and this simple step can save the country and our economy from disaster,” he continued.

PM Khan said that across the world, poverty has spread and the poor had to suffer because of lockdowns.

“I would, therefore, ask Pakistanis to mandatorily wear masks and observe precautions, especially during the occasion of Eid ul Adha,” he said.

“The government exerted a lot of pressure on people to adhere to the SOPs and I appreciate the nation for bearing with us, but if you want to avoid further lockdowns and restrictions, then continue to wear a mask,” he said.

The premier also urged people to get vaccinated. He said that even though Pakistan does not manufacture the anti-coronavirus vaccine on its own and the vaccination drive is not as quick as it is in the US for instance, people should take advantage of the available vaccines in the country and get themselves inoculated as soon as possible.