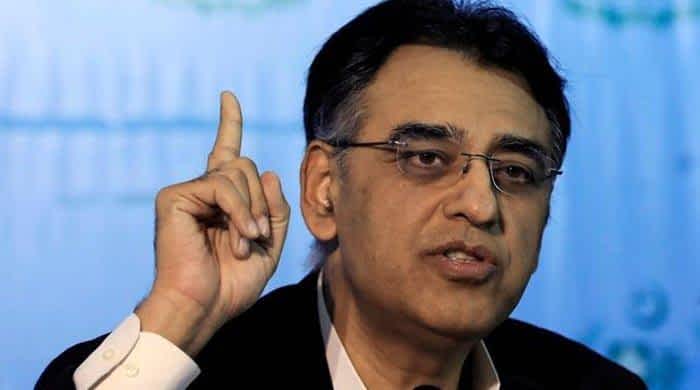 Federal Minister for Planning and Development and the Chief of the National Command and Operation Centre (NCOC) Asad Umar. Photo: File.

The Federal Minister for Planning and Development and the Chief of the National Command and Operation Centre (NCOC) Asad Umar on Wednesday issued a warning and said that if the coronavirus situation continues to worsen in the country, the government will be compelled to impose more restrictions.

Umar’s issued the statement after chairing an important session at the National Command and Operation Centre (NCOC) to discuss the worsening coronavirus situation in the country.

Addressing a media briefing after the meeting, the minister said that the government’s mandated standard operating procedures for coronavirus are not being implemented properly during the third coronavirus wave because of which critical cases have now exceeded 4,500.

The minister said that if the situation persists, the government will be left with no choice but to shut down major cities to contain the spread of the virus.

“At the NCOC, we reviewed the pandemic situation, which is bad. We have taken several decisions to impose more curbs which would be announced on Friday,” Umar said, adding major cities are not being closed right now, but a margin of only some days is left.

He added: “The positivity ratio in Karachi and Hyderabad is 13% and 14% respectively, while in Mardan it is 33% and 38% in Bahawalpur. In several cities, more than 80% of ventilators are in use.”

The minister also said that health facilities are under stress due to the increasing number of positive cases which have now crossed 83,000.

He also asked the chief ministers to take action against SOP violations and urged them to help the NCOC control the pandemic.

“You are the elected leaders, people have voted for you. They will listen to you,” he said.

As the coronavirus situation deteriorates during the third wave in Pakistan, the country reported 148 new fatalities, taking the total death tally to 16,600 on Wednesday.

As per the official statistics issued by the National Command and Operation Centre (NCOC), 5,499 new positive cases have been reported in the last 24 hours after 47,301 tests were conducted across the country.

In addition to this, 5,488 patients have recovered from the virus in the last 24 hours across the country, bringing the total number of recoveries to 672,619.