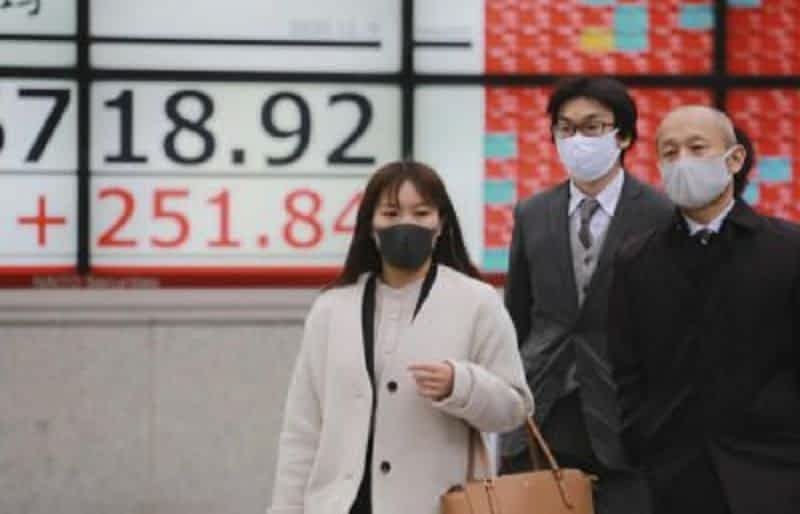 Asian markets fell across the board Tuesday as surging virus infections force governments to impose tighter containment measures, trumping the rollout of vaccines in the US and Britain, while the pound held gains on hopes for a post-Brexit trade deal.

The downbeat mood also comes despite some optimism that US lawmakers are inching towards finally agreeing a new stimulus for the world’s top economy.

Investors have taken a breather this month after November’s spectacular rally powered by the news of vaccines being shown to be effective and Joe Biden’s election victory.

“Signs of market fatigue are more prevalent today than a month ago, even as the popular average is near all-time highs,” Paul Nolte, at Kingsview Investment Management, said in a note.

“The much-awaited correction could come as investors tire of Washington, worry about the Covid cases over the holidays, or some other concern that is likely to pass in a few months.”

While the US on Monday began inoculations, its death toll hit 300,000 and analysts warned that while there is light at the end of the tunnel, there was still a lot of pain ahead.

That comes as countries around the world struggle to get a grip on the crisis. London faces new tough restrictions, following the rest of Britain into the highest tier of containment, while the Netherlands was preparing to enter its strictest lockdown since the pandemic began.

Turkey, France and Germany were also imposing tougher measures ahead of the Christmas holiday.

The Dow and S&P 500 both fell on Wall Street but the Nasdaq rose as tech firms benefit from people being forced to stay home.

There was little movement from news that China’s economy continued to improve last month, with retail sales and industrial output growing in line with expectations.

Pound holds gains
Traders continue to monitor talks on a fresh US rescue package on Capitol Hill after a bipartisan group of lawmakers put forward a proposal they hope will break a months-long deadlock.

Senators put forward two plans: a $748-billion bill with almost $300 billion in aid for small business, $300 a week in extra unemployment benefits and money for vaccine distribution; and another worth $160 billion for state aid and liability provisions for companies.

The second part aims to settle the two key sticking points that have kept Democrats and Republicans from making a deal.

“We have people hurting right now. We have an emergency, so let’s do what we need to do to take care of the emergency,” Republican Senator Mitt Romney said in a news conference, announcing the plans.

However, it is not known if the bill has the support of Donald Trump and Republican Senate Majority Leader Mitch McConnell.

And Axi strategist Stephen Innes warned: “Unless policymakers over-deliver on market expectation, especially at this time of year when our risk-taking proclivities give way to profit-taking, it seems virus-related economic restrictions will never cease to weigh as the market continues to straddle that fence between hope and reality.”

The pound was holding up as British and European Union negotiators pressed ahead with talks on a trade deal with just over two weeks until the December 31 deadline.

An EU diplomat said lead negotiator Michel Barnier had spoken of a “narrow path” to a trade deal with London, while the bloc’s chief Ursula von der Leyen said: “There is movement. That is good.”

Sterling rallied Monday after the two sides agreed to talk past a self-imposed Sunday deadline and “go the extra mile” for a pact, though British Prime Minister Boris Johnson has warned there is a very good chance they will not reach an agreement.

Singapore announces it will host inaugural T10 cricket league in 2021