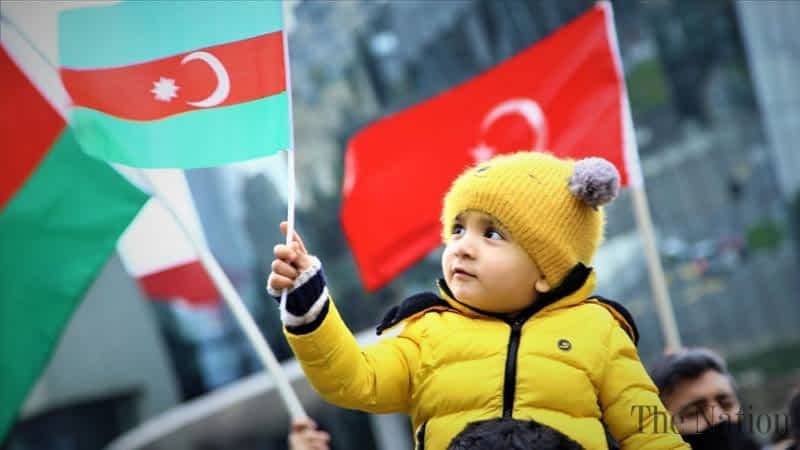 Azerbaijanis on Wednesday flocked to Martyrs’ Lane in the capital Baku to commemorate fallen soldiers and celebrate the liberation of a region which had been under Armenian occupation for 27 years.

Congratulating each other, people chanted slogans and waved Azerbaijani and Turkish flags after the army liberated Kalbajar.

The overjoyed people of Kalbajar also celebrated the liberation of their ancestral homeland.

After the liberation of five city centers, four towns and 286 villages in an operation launched by the Azerbaijani army on Sept. 27, Armenia accepted defeat and signed an agreement promising to evacuate the occupied provinces of Aghdam, Lachin and Kalbajar.

Azerbaijan had given 10 extra days to Armenia since the evacuation could not be completed on Nov. 15. Armenia had promised to leave the occupied region by Nov. 25.

Armenia, which withdrew from Aghdam on Nov. 20 and Kalbajar on Wednesday, is set to return Lachin to Azerbaijan by Dec. 1.

In related news, a new road is being built in Shusha after it was liberated by Azerbaijan on Nov. 8.

Azerbaijani President İlham Aliyev laid the foundation of the new road that will start from the village of Ahmetbeyli in the Fuzuli province, go through the city center of Fuzuli and 20 settlements, and finally connect to Shusha.

The Azerbaijan State Highway Agency said the road will be 101.5 kilometers (62.7 miles) long and 37.7 meters (123 feet) wide and is expected to be completed in one-and-a-half years.

Azerbaijan liberated several cities and nearly 300 of its settlements, including the strategic city of Shusha, and villages from the Armenian occupation in the past few weeks.

Relations between the former Soviet republics of Azerbaijan and Armenia have been tense since 1991 when the Armenian military occupied Nagorno-Karabakh, also known as Upper Karabakh, a territory recognized as part of Azerbaijan, and seven adjacent regions.