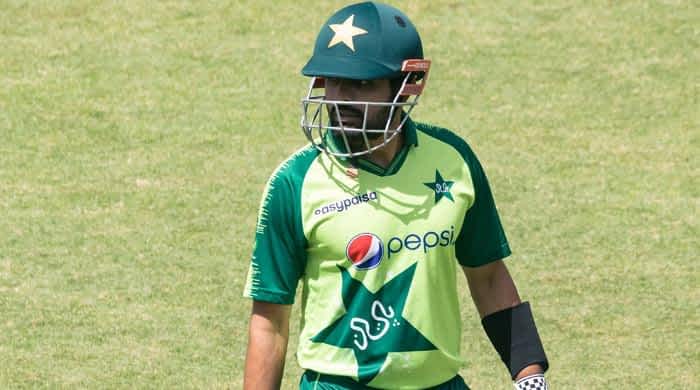 Pakistan’s captian Babar Azam walks off the pitch after being dismissed by Zimbabwe’s Blessing Muzarabani during the first Twenty20 international cricket match between Zimbabwe and Pakistan at the Harare Sports Club in Harare on April 21, 2021. — AFP

DUBAI: Pakistan captain Babar Azam has climbed up in the ICC rankings following a spectacular performance  against South Africa in the recent T20I series.

A look at the ICC’s T20I rankings. — ICC website

As per the latest update, Azam has moved to the second spot in the ICC T20I rankings with 844 points, overtaking Australia’s white ball captain Aaron Finch.

The Pakistani captain is now behind England’s Dawid Malan who sits at the top of the rankings with 892 points.

Babar Azam ended the South Africa series as the highest run scorer. He scored 210 runs at an average of 52.50 in four innings. During the series, Azam also scored his maiden T20I century.

If Babar Azam overtakes England’s Malan in the T20 rankings, it would be the second time that he would sit on top of the table.

This is also the second time within this month that Babar has progressed within the ICC rankings.