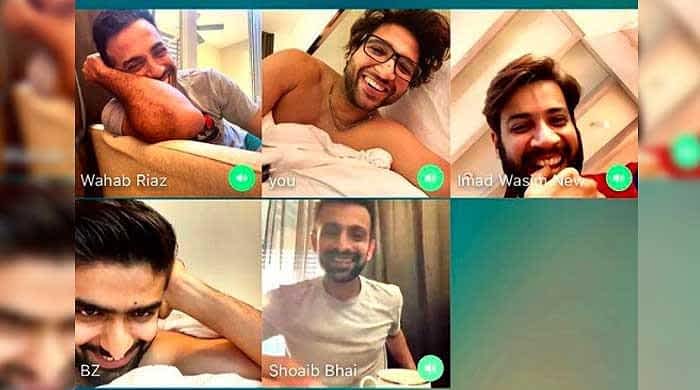 The PSL 2021 is a heartbeat away and fans cannot be more excited to see the remaining matches be played in Abu Dhabi. However, the rules entail all players must complete their quarantine period by strictly abiding to the rules.

Isolating can be quite boring, especially for international cricketers. However, Pakistani cricketers Babar Azam and Imam ul Haq have found a way to beat the bio-secure bubble boredom.

Haq posted the screenshot of a video call in which the cricketer can be seen interacting with Wahab Riaz, Imad Wasim, Babar Azam and Shoaib Malik.

It seems as if the screenshot has been taken while the players were having a hearty laugh as everyone, from Azam to Malik, can be seen smiling in the picture.

Haq revealed how the players were on the same floors in the hotel but couldn’t meet each other.

“So close, yet so far. Bio-secure bubble at its full flow. We’re all in close proximity. Some even on same floors but still not meeting.

“Keeping ourselves entertained with video calls, so that we can all entertain you from the ground in a few days,” he wrote.

A few days ago, the Pakistan Cricket Board (PCB) had confirmed receiving all the necessary permissions to hold 20 remaining matches the PSL 6 in UAE under strict precautionary measures.

Here’s all you need to know about the updated squads of the six teams: