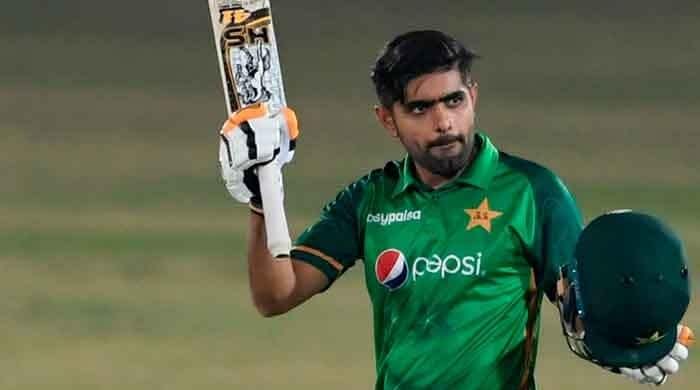 KARACHI: Skipper Babar Azam was trending on top on Pakistani social media after he scored a match-winning century against South Africa in the opening match in Centurian.

The Pakistan captain hit a stroke-filled 103 off 104 balls and shared a second-wicket partnership of 177 with Imam-ul-Haq, who made 70.

Babar Azam’s century puts him in a league of his own as the cricketer becomes the fastest batsman in the world to score 13 ODI centuries.

Former Pakistani cricketers, politicians, celebrities and social media users were full of praise for the skipper and hailed his performance which helped the Green Shirts win the opening match.

Federal Minister for Planning Asad Umar and PML-N’s Ahsan Iqbal hailed the cricketer in their statements after the match.

“What a great performance by the greens. @babarazam258 you are a sheer joy to watch and make the nation proud again and again,” said the PTI leader.

“Captain’s knock by Babar Azam with a century,” tweeted Iqbal.

The skipper was also appreciated by his teammate Shoaib Malik.

“Great individual performances by @babarazam258 & @ImamUlHaq12,” Malik said and advised them to finish the game as Pakistan’s middle order is inexperienced.

US confirms to take part in Vienna nuclear meet, says ‘open’ to direct talks with Iran