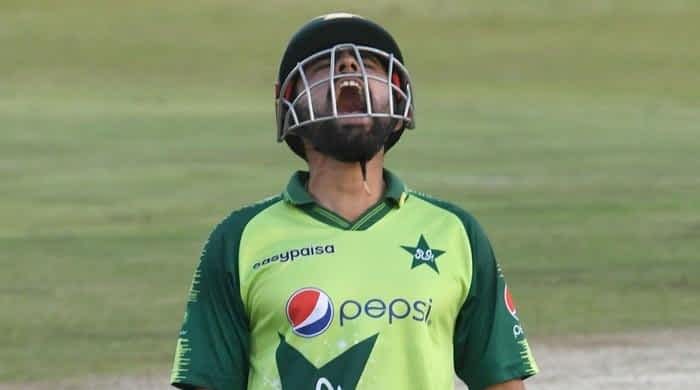 When Pakistan came out to bat, it was always going to be a difficult task to chase South Africa’s mammoth 204-run target. That, too, in a T20 game.

Yet Azam rose to the occasion, again.

With him, Pakistan’s wicket-keeper batsman Muhammad Rizwan played a spectacular inning as well, smashing an unbeaten 73 runs off 47 balls.

However, the day belonged to Azam who smashed his first century in the T20 format. The Pakistani skipper drove Tabraiz Shamsi for a boundary, bringing up his century off only 49 balls.

As soon as the ball made its way to the fence, Azam went down on his knees, giving out an emphatic roar before thanking the Almighty.

For every Pakistani fan out there, it was a sight for sore eyes.

The Pakistani skipper proved to the world why he is the best batsman after he toppled Indian captain Virat Kohli to become the top-ranked ODI batsman in the world.

Babar Azam and Mohammad Rizwan put on 197, the fourth-highest T20I partnership overall, and the highest ever in a chase, according to ESPN.

Fakhar Zaman, who came to bat after Azam was sent back to the pavilion, hit two fours to end the match.

Earlier, South Africa’s top-order batsmen — Janneman Malan and Aiden Markram — gave a tough time to the Pakistani bowlers, as they hit a combined score of 118 runs.

Malan hit 55 runs off 40 balls, while Markram was able to score 63 off 31 balls, which helped the Proteas achieve the 200+ target. George Linde and Rassie van der Dussen hit 22 and 34 runs, respectively.

Hassan Ali conceded most runs, 47, from Pakistan’s bowling side; however, he took a wicket for the team. Meanwhile, Shaheen Shah Afridi and Faheem Ashraf also picked up a wicket each.

The action for the last two T20Is has moved to Supersport Park in Centurion after the first two games of the series were played at the Wanderers Stadium in Johannesburg.

Both sides are using the series as preparation for the ICC Men’s T20 World Cup that will be played in India later this year.

In the last game, South Africa beat Pakistan by six wickets after comprehensively chasing the 140-run target set by Pakistan.

Pakistani bowlers were hapless against South Africa batters as they managed to pick up just four wickets. Usman Qadir managed a pair of wickets while Hassan Ali and Mohammad Hasnain took a wicket each.

Pakistan reached a measly 140 for 9, courtesy Babar Azam’s 50 off 50 balls and Mohammad Hafeez’s 32 off 23. However, the rest of the batting lineup failed to produce many runs.

George Linde did the big damage in the Powerplay before Lizaad Williams, Sisanda Magala, and Tabraiz Shamsi joined in later on.