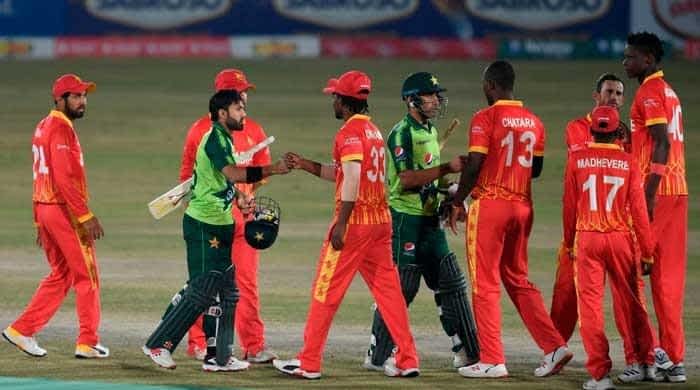 Mohammad Rizwan and teammate Khushdil Shah meet with Zimbabwe’s players after winning the first Twenty20 cricket match between Pakistan and Zimbabwe at the Rawalpindi Cricket Stadium in Rawalpindi on November 7, 2020. Photo: AFP

RAWALPINDI: Pakistan on Saturday secured a comfortable six-wicket win against Zimbabwe in the first T20I held at the Rawalpindi Cricket Stadium.

From the visiting team, Blessing Muzarabani was the lead wicket taker with the fast bowler picking up two wickets. Tendai Chatara and Richard Ngarava picked one wicket each.

Zimbabwe opted to bat first after winning the toss and was propelled to 156 due to Wesley Madhevere’s 48-ball 70. The visiting team also benefited from wicketkeeper Brendon Taylor’s 20, Sean Williams’ 25 and Elton Chigumbura’s 21 runs at the back end of the innings.

Pakistan started the chase strongly but lost opener Fakhar Zaman and middle-order batsman Haider Ali in the first eight overs. However, skipper Babar Azam and veteran all-rounder Mohammad Hafeez made sure that the team was in commanding position before getting out in the 16th and 18th over, respectively.

By the time Hafeez got out in the 18th over Pakistan was 156 for 4 and only required one run to win which was an easy task for wicketkeeper Mohammad Rizwan.

Babar Azam, who was also declared man of the match for his 82 runs, said that he is satisfied with his performance. He added that the Pakistan team is trying to ensure that young players are given a chance so the team has many options when it goes to the World Cup.

WHO says ‘will do everything’ to discover origin of Covid-19