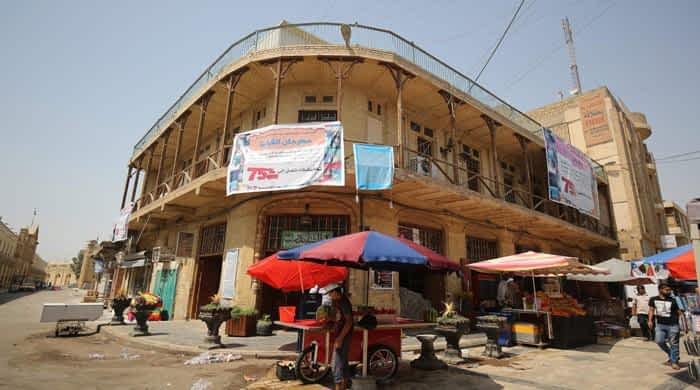 BAGHDAD: Seated at tables with glasses of tea in the heart of Baghdad´s bookshop district, the customers of Shabandar cafe have watched 100 years of Iraq´s tumultuous history pass by.

Since opening its doors a century ago, the establishment has become a hub of Baghdad´s intellectual life, drawing poets and politicians to its wooden benches and photo-lined walls.

“I´ve been coming here for the past 60 years,” Abdel Fattah al-Noeimi, 77, tells AFP, dapper in his spotless brown suit and matching tie.

“At nine in the morning until two or three in the afternoon, when everyone is leaving.”

From British rule to modern-day Iraq, Shabandar has lived through the birth of a nation, the toppling of its monarchy, decades of domination by Saddam Hussein, the drama of the US-led invasion and the bloody chaos that followed.

The twists and tragedies have all left their mark on the cafe.

During the sectarian bloodletting, a car bomb in 2007 tore through the historic Al-Mutanabbi Street on which the cafe stands — killing around 100 people.

Among the dead were four sons and a grandson of Shabandar´s owner, Mohammed al-Khashali.

But Khashali does not want to dwell on that tragic event — and today the rhythm of clinking tea glasses, bubbling hookah pipes and conversation hums just as it always has done.

“Taking a seat here is like taking a seat in a history book,” the proprietor tells AFP from his regular position by the glass and wood front doors.

When it first became a cafe in 1917, the brick and plaster building was already a local institution as it housed the printing press of merchant Abdel Majid al-Shabandar — whose name comes from Turkish, meaning “the greatest of merchants”.

Khashali — who sports a traditional white robe and beard of the same colour — took over in 1963 and made a decision that would prove defining: he banned all games, including cards and dominoes, from the cafe.

While the move surprised some customers, it meant the new owner stayed true to a “promise” he had made to himself.

“That this would be a place where people of culture would meet,” Khashali said.

“That is truly what happened.”

Dozens of black and white photographs covering the walls of the cafe offer a glimpse into the history of Baghdad and Iraq, chronicling some of its leading lights and others who have since slipped into obscurity.

In a golden book, a number of foreign ambassadors have left their signatures.

The diversity of the faces of the men and women lining the walls is echoed nowadays by the varied crowd that still packs into Shabandar each morning.

The cafe is “not reserved for any religion, or culture or part of society — everyone is here”, says regular patron Noeimi.

It even encompasses a certain “school of thought” of its own, he insists, where despite the profound divisions that have torn apart Iraqi society, “everyone respects each others´ ideas”.

As the hubbub of chatter and shouted orders rumbles on around him, Rammah Abdelamir, 17, looks up from his book on modern political thought to take in this “monument of old Baghdad”.

Waiters weave between customers, filling their glasses with steaming hot tea, as they barely look up from deep in their conversations.

“This place is a bit of a mecca for intellectuals and a place of learning for each new generation,” Abdelamir says.

polluted by a permanent black tide