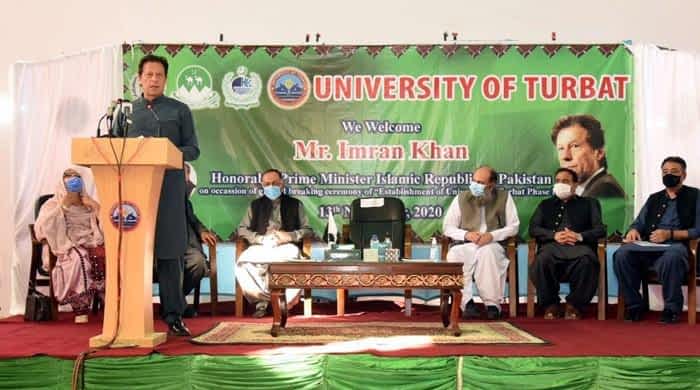 QUETTA/TURBAT: In his first-ever visit to Balochistan’s Turbat city, Prime Minister Imran Khan said that the number of scholarships to students would be doubled and that elevating the province and helping it progress was a “part of [his] imaan [faith]”.

Speaking at the foundation stone-laying ceremony of development projects in Turbat, PM Imran Khan underlined that the city had a history and that its people were “the future of Pakistan”.

“I have come to Turbat for the first time,” he mentioned, before talking about the importance of education for [the] development of the people and cities, as well as his government’s increased focus on Balochistan, as opposed to the prior administrations.

“Knowledge,” he said, “makes humans unique from other creatures. No society has progressed without education.

The premier underscored that “Balochistan never received as much funding as our government [provided to the province]” and that it lagged behind due to a lack of funding in the past.

“We will help Balochistan in every possible way,” PM Imran Khan vowed, adding that his government would assist the province especially in the field of education.

The premier noted that prior regimes “did not need votes from Balochistan and formed governments if they got enough votes from Punjab and Sindh or Punjab and Khyber Pakhtunkhwa”.

“Very few federal governments thought of Balochistan,” he said. “Secondly — and I say this with sadness — Balochistan’s politicians most often prioritised themselves over the people of Balochistan and this, unfortunately, was not just in Balochistan but in Pakistan as well.

“Our political people benefited themselves than give that benefit to the country,” he noted.

Not for politics or votes but ‘part of my imaan’

PM Imran Khan spoke of how leaders in the past made more trips to London and Dubai than to Balochistan in their tenures. “That’s why the attention that Balochistan needed was not given to it,” he stated.

He stressed that he was in Turbat neither on a political trip nor for votes but because “this is a part of my imaan [faith] that a people never progress unless and until they bring forward with them the weaker portion of the society”.

“This is what our Holy Prophet (PBUH) through his state of Madinah provided as a model. The world’s first welfare state was set up there and then, China, too, proved how in 30 years, it pulled 700 million people out of poverty and simultaneously became a superpower.

“One of the major reasons behind China’s CPEC [China-Pakistan Economic Corridor] was that it wanted to connect western China — which had lagged behind — to the sea through the CPEC so that it could progress rapidly as well,” he said.

‘Prime minister is like a father of the nation’

PM Imran Khan praised the Chinese leadership for its vision and for understanding that no country or people could progress if a small faction of the population becomes wealthy and the rest of the society got left behind.

“That’s why our goal in elevating Balochistan is not just that I announce projects here and — how it happened in the past — I clap and leave, but I reiterate that it’s a part of my imaan [faith] that since Balochistan was left behind, we will try our best to elevate Balochistan to bring it to the level the rest of Pakistan is at,” he said.

The premier said a “country is home” and “the prime minister is like a father of the nation” who has to see to it that he treats all the children equally in their progress.

“That’s why I’m very happy that the chief minister of Punjab [Usman Buzdar] is here with us today and he, too, invested in Balochistan’s university and hospital.

“It’s like an elder brother is trying to help out his younger brother and this is how the country progress.

“The way people benefited from Balochistan’s deprivation, they had other goals, they were successful in creating divisions because they conveyed to the people an impression as to what was the benefit of becoming part of Pakistan.

“I want to tell you all today that Balochistan becoming a part of Pakistan, God willing, will benefit you beyond your imagination right now.

“The first thing is the connectivity with China and remember that the country that’s progressing the fastest in the world is China, of which the rest of the countries are scared.

“They are fearful of its progress. That’s because China, in a few years, will leave behind the rest of the world.

The premier said Pakistan was lucky for being connected to China and Balochistan lucky because it had Gwadar.

“Gwadar will connect to China and think of China’s trade — $2,000 billion — as opposed to Pakistan’s exports, which, at the moment, amount to a mere $25 billion,” he underlined.

The PM said the “new revolution coming in the world” was crucial for the youth and Pakistan had a young population. “So, to obtain the most benefit from the information communication technology, it was necessary for us to provide Internet facilities to Balochistan’s far-off areas,” he said.

“I want to assure you completely of our efforts for poor households and the salaried people — who do not have enough money to build their own houses — we’re bringing the Naya Pakistan Housing Scheme here in Balochistan as well, God willing,” he said.

He explained that the Naya Pakistan Housing Scheme would offer loans for five-marla houses at 5% interest rate, regardless of whether it shot up in the market or not “in order to allow people to have their own houses by repaying installments over 10 or 15 years” the same way they paid rent.

“All of these things are happening for the first time in Pakistan, just like I spoke of the Ehsaas Programme, through which Rs200 billion — which is called poverty alleviation — was spent and [it wasn’t ever done] before in Pakistan’s history, especially at a time when our economic situation is worse,” he noted.

‘God was benevolent’ to Pakistan

PM Imran Khan counted Pakistan’s victories, saying the economy was improving, deficits reducing, and no loan obtained in the past four months.

“For the first time in 17 years, Pakistan — which was going into deficit — went into surplus in only one quarter, meaning that this was our gain, a huge achievement of our government because as long as there’s a deficit between the income and expenditure, a country cannot progress as it has to get loans,” he said.

“Today, I thank God, we’re selling record cement [industry] because we started construction activity in Pakistan, there have been record sales. Structural Iron [foundation] started being sold, sales of vehicles and motorcycles are rising.

“Our economy was stagnant — in the same condition as India is in right now, their economy has crashed — ours, however, thank God, is rising despite the coronavirus [pandemic].

“Pakistan’s stock market is the best performing one in Asia and what I want to say is that despite all these challenges, God was benevolent to us, our policies were successful and our country is progressing today.

Virtual education in days of pandemic

The PM said the government would invest in the poor sections of the society as Pakistan’s incomes grows and money comes in — “the same way that China did”.

The prime minister also noted that virtual education started in the days of the coronavirus pandemic. “It is no longer necessary to study in cities,” he said.

“Scholarships for male and female students of Balochistan are being increased from 185 to 360,” he announced.

Earlier in the day, Planning and Development Minister Asad Umar had said PM Imran Khan would announce a “historical development package” for Turbat during his one-day visit to the city. “The projects were finalised after months of hard-work by a dozen ministers,” he wrote on Twitter.

PM Imran was also expected to lay the foundation stone of the 200-bed Makran Teaching Hospital in Turbat.