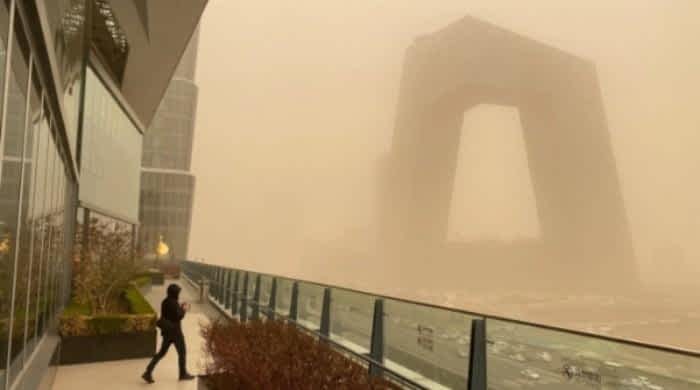 The CCTV building was among the landmarks obscured by Monday’s sandstorm [Leo Ramirez/AFP]China’s capital city smothered by thick yellow smog; residents use goggles, masks, and hairnets for protection.Beijing govt orders all schools to cancel outside sport and events and advised those with respiratory diseases to stay inside.
Beijing’s Forbidden City and CCTV’s distinctive headquarters partly obscured behind an apocalyptic-looking pall of smog.

BEIJING: With pollution surging to hazardous levels in China, its capital city Beijing was smothered by thick yellow smog on Monday, with residents using goggles, masks, and hairnets to protect themselves from the choking air.

Landmarks, including the Forbidden City and the distinctive headquarters of state broadcaster CCTV, were partly obscured behind an apocalyptic-looking pall of smog.

Beijing government ordered all schools to cancel outside sport and events and advised those with respiratory diseases to stay inside.

The poor air quality was due to a sandstorm from northern Mongolia, carried south by the wind and reducing visibility in Beijing to less than 1,000 metres (3,300 feet), state media reported.

Discussion of the orange haze lit up online discussions, with more than 54 million views on social media platform Weibo by Monday morning. Some users said the air was reminiscent of the apocalyptic science fiction film Interstellar.

“This orange-red sandstorm makes it looks like the end of the world,” said one Weibo user.

Pollution in the city was at “hazardous” levels, according to the air quality monitoring website Aqicn, which said levels of PM 10 large particulate matter were nearly 20 times the World Health Organization’s (WHO) recommended daily maximum exposure.

Smaller PM 2.5 particles, which seep deep into human lungs and cause respiratory illnesses, were also at a hazardous level of 567 on Monday — more than 20 times the WHO recommended daily limit.

China cut its national average level of airborne PM 2.5 dramatically between 2015 and 2019 and the government has announced an ambitious target to reach carbon neutrality by 2060.