Beyond the horizon | Art & Culture | thenews.com.pk 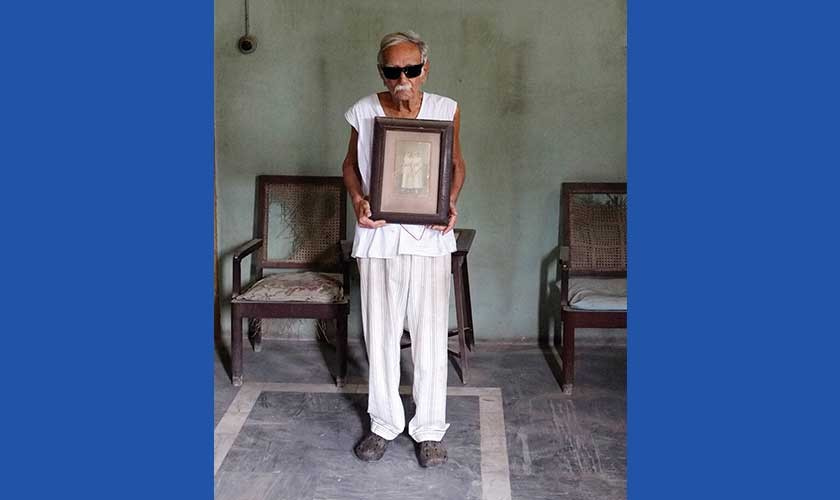 “I craved to seize the whole essence, in the confines of one single photograph, of some situation that was in the process of unrolling itself before my eyes.”

Arif Mehmood’s photographs, a multiple portrait of the humankind, invite us to celebrate the dignity of it. These images of solitude and devotion are brutally frank yet respectful and seemly. Having no relation to the tourism of poverty, they do not violate but penetrate the human spirit in order to reveal it. His is not a macabre, obscene exhibitionism of poverty. It is a poetry of horror because there is a sense of honour.

Light is a buried secret, and Mehmood’s photographs tell us that secret. The emergence of the image from the waters of the developer, when the light becomes forever fixed in shadow, is a unique moment that detaches itself from time and is transformed forever. These photographs will live on after their subjects and their author, bearing testimony to the world’s naked truth and hidden splendour, are no more. Mehmood’s camera moves about the violent darkness, seeking light, stalking light. Does the light descend from the sky or rise out of us? That instant of trapped light – that gleam – in the photographs reveals to us what is unseen, what is seen but unnoticed; an unperceived presence, a powerful absence. It shows that concealed within the pain of living and the tragedy of dying there is a potent magic, a luminous mystery that redeems the human adventure in the world.

Yet photographers are caught in a curious bind. Cartier-Bresson, who at various times derided the documentary impulse in favour of the visual drama, the pursuit of an unfolding choreography, was well aware of the reality/unreality that one is constantly coming up with, the intermix of fiction and non-fiction. Mehmood’s more consistently documentary approach also has its highly interpretive, imaginary aspects, which, despite the apparent matter-of-factness of photography, give the imagery much of its depth. One might say that, while respecting the facts of a situation, Mehmood attempts to recreate, through visual metaphors, what he sees as its essential human drama – the invisible made visible.

Mehmood’s work, while confined to the moment by the mechanics of the camera, is drawn less to celebrating and taming an instant’s arbitrariness, its material manifestations, and more to articulating its eternity, its ephemeral profundity, and to locating a mythic, entwining presence. This aspect of his approach is something he has in common with Latin Americans drawn to what has been called a ‘magical realism’. Similarly, while recognising the individual’s singular importance in his images, he is also quick to draw relationships to the universal. There is, enmeshed in his document of the moment, a resonating lyric, a sense of the epic, an iconic landscape. The former ‘pilot’ invokes a poetic sense of struggles so profound that in his prints, the forces of light and darkness are summoned in scenes reminiscent at times of the most dramatic chiaroscuro.

In the history of photography, it has often been debated whether the pictorial photograph can be termed art at all. Indeed, analogue photographs as well as digital are by their very nature traces, not unlike fingerprints. What then does a photographer contribute? The answer also lies in the very nature of what is photographed. It is his frozen view; his orientation to the things in the world that appear significant to him, and equally importantly, the manner in which he represents what he perceives. In fact, no photograph is ever truly objective. Rather, it always constitutes both an abstraction and a subjective perspective, a conscious effort.

Until you come of age, photographs that you care to see are often those that other people take of you. Looking at paper copies of anything else is not exciting. Your world is small, and like other children, you live out your days in utter abandon in pursuit of what you need and want. Thought and indecision creep into your life much later.

This comfortable equation between oneself and one’s world is imperiled (read shaken) at the age when you get your first camera, suddenly saddled with the obligation to think and to observe. The first major crisis is to make the intractable decision: what should I photograph. It is almost like choosing between my dog and my best friend. The very act of taking that photograph would somehow determine what you hold as most precious: what you ignore would, in future, always be second best.

Camera is the devil’s own tool: every time you pick it up you become someone else. Just holding his Leica makes Arif Mehmood dissect his universe. It drives him to measure the relative merits of things and people close to his heart, and makes him place value on his most priceless possessions, introducing guilt into his life. Not including someone or something in that foot and a half of celluloid somehow amounts to the betrayal of a relationship. The only members of his inner sanctum to which he wants to accord immortality – without being traumatised – have been his constant companions – ones that he has had the most comfortable and least complex relationships with: PS Pestonjee – the last of the Mohicans; and the ‘friends of God’ – sufi saints, dervishes and devotees.

The photographs on display comprised two separate bodies of work: PS Pestonjee – a paean to senility and solitude, and Silver Linings – journeys to sites of mystical Islam taken between 1998 and 2020. Arif Mehmood recalls that his father fell ill in 2016 and passed away in 2019. That inspired him to look at the agile and nimble figure of Pestonjee – only a year older than Mehmood’s father – in comparison. Living in a derelict mansion in Soldier Bazaar, the old Zoroastrian appears to be a sentinel of the dwindling community.

With their warm colours, Arif Mehmood’s photographs enchant the artistically sensitive observer. These are works of art with a truly aural character. They allow insights into the everyday culture of the Punjab and Sindh, which is permeated by the Sufi tradition, and as a rule, is concealed from the superficial eye. They reflect the peaceful, almost paradisiacal atmosphere of the saints’ shrines. With these impressions, Mehmood also opens up an alternative to academic verbosity – to the ‘narrative textual paradigm’, in other words, to a distinct predominance of the text over image and object.

Veneration of sufi saints can be witnessed in all social strata and permits the individual believer to experience personal, concrete contact with what he deems holy. This is exactly what the photographs exhibited here attempt to do: they aim to initiate a dialogue, also with people familiar with the presented and interpreted cultural environment. They strive to provide aesthetic access beyond the appeal of the exotic observers in order to offer a new understanding of those people and their hopes, ideals and values whose home is interpreted in these photographs.

Dedicated to his mother, Mehmood recounts in Silver Linings – the book of photography that accompanied the show – that he first visited Lal Shahbaz Qalandar’s mausoleum in 1998. His work focuses in on the sacred spaces and the people who visit them in search of healing and religious experience. Thus, these photographs are also historical/ethnographic documents of the life of mystic seekers of God. Mehmood’s work invites the observer to experience imaginary, atmospheric wanderings. These are pictures that reveal quietude and contemplation. Through such photographs of a light mystique, he can create a feeling for conditions in which the sufis, pilgrims, mendicants find themselves in the respective situation: meditation, introversion, renunciation and commonality. Some photographs highlight the sufi ideals of simplicity and contentment.

The photographs on display in Silver Linings are not necessarily shot to illustrate a theme. They were taken as individual photographs of separate lives. If there is a common thread that runs through them, it is the manner of their making and the period in the photographer’s life that they represent. These images were exposed both on negative film and digitally, when in 1998 Mehmood picked up his camera again after a year-long sabbatical from the medium. The abstinence was self-ordained, provoked by an internalised process of deliberation that had begun to question “what do I photograph, how do I photograph it, and even why do I photograph at all.” He paused in an effort to distance himself from his personal work, to pull the photographic idiom decisively away from the compulsion to speak a universally cogent language, and instead, bring his own grammar as close as he could to the common detail in his life and to the lives of others. This episode is yet another example of the power that photography wields in constructing one’s own personal equations.

More than to show, Arif Mehmood shoots to see. If anything, his photographs heighten the banality of their detail. Vulnerability is just another element that determines the choices individuals make in their lives as they willingly shoulder the burden of their own minds. What Pestonjee chooses to allow into his inner sanctum; what he chooses to lock himself into or out of; how long he subjects himself to the vision of a lingering past; whether memories will come alive to the geometry and colour about them; whether they will enter the green windows along their way or pass them by; whether they will step out of the shade to accept their right; whether they are willing to upturn their ‘wheelbarrows’. It is the making of these choices that Mehmood waits to see in his frames. These photographs are a ‘temporary’ record of fleeting insights into the lives of others. Like reality, like himself, like the subjects, like PS Pestonjee, they too, in time, will fade.