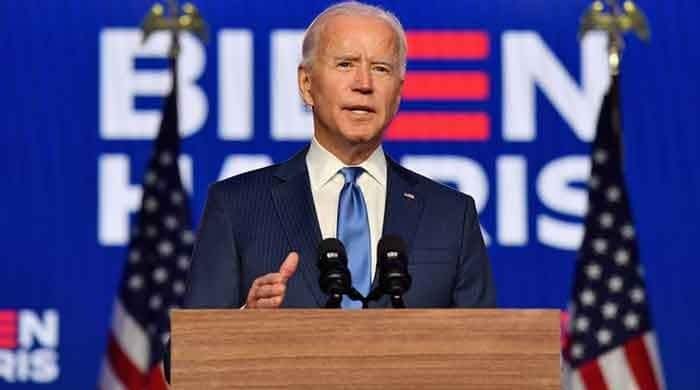 Democratic presidential nominee Joe Biden delivers remarks at the Chase Center in Wilmington, Delaware, on November 6, 2020. Image: Angela Weiss/AFP via Getty ImagesUS responds to rocket attacks on coalition forces and American military in the regionUp to a handful of militants killed in airstrikes, says a US officialAirstrikes ordered by President Biden on Thursday morning, confirms Pentagon

US President Joe Biden ordered his first military action on Friday as the American military carried out airstrikes on a site in Syria.

According to a US official, “up to a handful” of militants are believed to be killed by the airstrikes which took place today.

The US conducted the airstrikes at a site which it considered as the location for a weapons smuggling operation by a militia allegedly backed by Iran.

The strikes came in response to rocket attacks that were launched on US and coalition forces in the region allegedly by the same militia.

John Kirby, the Pentagon spokesperson, confirmed that the attack took place “at President Biden’s direction” and was authorised to respond to the recent attacks on US forces and also, to send a message to forces who were targeting the US and coalition personnel.

“Specifically, the strikes destroyed multiple facilities located at a border control point used by a number of Iranian-backed militant groups, including Kata’ib Hezbollah and Kata’ib Sayyid al Shuhada,” Kirby said. “The operation sends an unambiguous message; President Biden will act to protect American coalition personnel. At the same time, we have acted in a deliberate manner that aims to de-escalate the overall situation in both Eastern Syria and Iraq.”

The site struck by the US forces is believed to be the location of a smuggling operation conducted by the militia. A US official said that the main aim of the operation was to thwart the militia’s ability to carry out attacks.

The decision, Austin clarified, had been taken by the US president and authorised on Thursday morning after he recommended that action be taken against the militants.

Speaking to the press, Austin said that the US was “confident in the target we went after”, adding that “we know what we hit”.

“We allowed and encouraged the Iraqis to investigate and develop intelligence, and that was very helpful to us in refining the target,” he said.

The Pentagon further clarified that the US president had authorised the attack after consulting allies.

Protests erupt after police kills another Black man in US