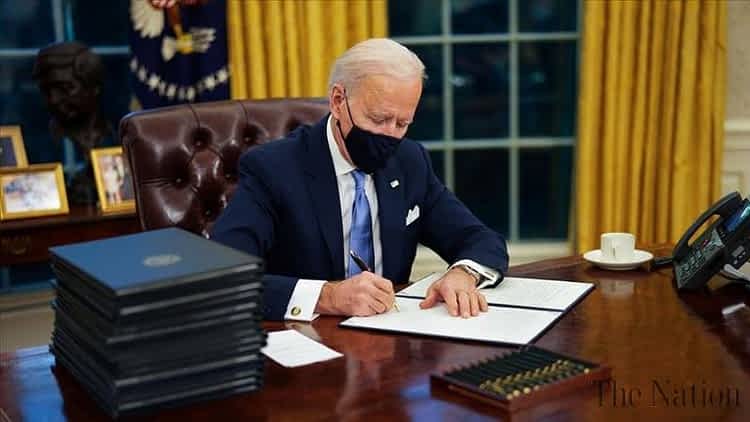 US President Joe Biden signed off Wednesday on 17 executive orders aimed at undoing much of his predecessor’s legacy on policies that span the gamut from immigration to climate and health policy.

Biden described the efforts as “starting points” as he begins his four years in office following his inauguration at the Capitol earlier in the day, saying his policy agenda is “bold and vital.”

“With the state of the nation today, I thought it’s no time to waste, get to work immediately,” Biden told reporters while donning a mask in the Oval Office. “There’s no time to start like today.”

The orders place the US on track to rejoin the Paris Climate Accord, the landmark agreement aimed at rolling back carbon emissions that former President Donald Trump chose to unilaterally exit from in a process that was finalized Nov. 4. The accord seeks to limit global warming and achieve a carbon neutral world by 2050.

UN Secretary-General Antonio Guterres quickly welcomed Biden’s action but cautioned “there is a very long way to go” before the agreement’s lofty goals are met.

“The climate crisis continues to worsen and time is running out to limit the temperature rise to 1.5 degrees Celsius and build more climate-resilient societies that help to protect the most vulnerable,” he said in a statement. “We look forward to the leadership of the United States in accelerating global efforts towards net zero, including by bringing forward a new nationally determined contribution with ambitious 2030 targets.”

Biden also moved to have the US rejoin the World Health Organization (WHO), which Trump moved to withdraw from in July amid disagreements over the international health authority’s handling of the coronavirus pandemic.

Guterres lauded the decision, saying it will accelerate the UN’s worldwide vaccine distribution efforts and helped to unify the global response to the pandemic.

At home, Biden ordered masks to be worn and social distancing maintained on federal property as well as in interstate commerce in an effort to help stymy the virus’s spread as it continues to ravage the country with over 400,000 deaths.

Biden signed just three of the 17 expected orders with journalists present, but the White House was expected to provide additional details on the others, including the repeal of Trump’s Muslim ban, during an evening press conference.