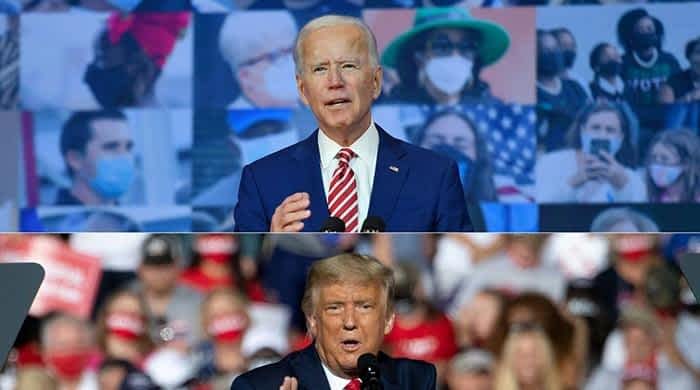 President Donald Trump and Democratic challenger Joe Biden are battling it out for the White House. — AFP

WASHINGTON: The race for the White House continued on Wednesday with Joe Biden brightening his prospects of securing the Oval Office after leading in Wisconsin and  Michigan by a slim margin.

All eyes are on the key states of Wisconsin, Michigan and Pennsylvania — and the southwest — Nevada and Arizona — which could prove effective in determining whether Trump wins another term or goes home to make room for Biden in the White House.

Some have predicted that the final result of the election may take “days”, leading to fears that the resultant uncertainty may stoke civil unrest as an incredibly charged election campaign reaches its conclusion.

US President Donald Trump — who made a surprisingly strong showing in the polls, negating critics who had predicted an easy defeat — has already claimed election fraud and declared an illegal victory. He has made clear that he believes his mandate his being snatched and the “real result” has already been delivered.

Meanwhile, Democratic rival Joe Biden has made clear that he has a team of lawyers at the ready in case any illegal disruption of the vote counting process is initiated by his rival.

“We won’t rest until everyone’s vote is counted,” he wrote on Twitter.

Biden’s campaign said the former US vice president was on track to win the election, with expected victories in the battleground states of Michigan, Wisconsin and Pennsylvania.

Campaign manager Jennifer O’Malley Dillon said she expected Biden will have more than 270 electoral votes later on Wednesday. She told reporters she believed Biden has already won Wisconsin and was expected to win Nevada

Both candidates still have possible paths to reach the needed 270 Electoral College votes to win the White House, as states keep counting mail-in ballots — votes sent by US citizens through snail mail — which were historically high as voters sought to protect themselves from coming in contact with others by staying at home amid the raging coronavirus epidemic in the US.

As the counting of votes advances, the world’s attention is beginning to focus on four fundamental states that will define who will win the race. All eyes have fallen on Wisconsin, Michigan, Pennsylvania, and Georgia.

These three states add up to a total of 62 electoral votes, of which 16 correspond to Georgia, 10 to Wisconsin, 16 to Michigan and 20 to Pennsylvania, which is also the home state of Democratic candidate Joe Biden.

Final results in these states, where millions of mailed votes have been received, are estimated to take several days to be known.

‘We want all voting to stop’

Shortly after Biden said he was confident of winning the contest once the votes are counted, Trump appeared at the White House in the early hours to declare victory and said his lawyers would be taking his case to the US Supreme Court, without specifying what they would claim.

“This is a major fraud on our nation. We want the law to be used in a proper manner. So we’ll be going to the US Supreme Court. We want all voting to stop.”

He provided no evidence to back up his claim of fraud.

Of the three “blue wall” states that unexpectedly sent Trump to the White House in 2016 — Michigan, Pennsylvania and Wisconsin — two remained too close to call. Biden held a slight lead in Nevada, where officials said they would not resume counting until Thursday.

Two Southern states, Georgia and North Carolina, were also still in play; Trump held leads in both. A win for Biden in either one would narrow Trump’s chances considerably.

Biden’s victory in Arizona — both Fox News and the Associated Press projected he would win the state — gave him multiple pathways to the White House.

If he holds onto Nevada, he could secure the presidency by winning the Midwestern states of Wisconsin and Michigan, where he held large leads in polls before Election Day, even if he loses Pennsylvania.

Trump’s most likely path goes through Pennsylvania; if he wins that state, he would secure re-election if he also held onto the Southern states and won at least one Midwestern state.

Biden leads 224 to 213 over Trump in the Electoral College vote count, according to Edison Research.

Biden’s hopes of a decisive early victory were dashed on Tuesday evening when Trump won the battlegrounds of Florida, Ohio and Texas. But the former vice president, 77, said he was confident he could win by taking the three key Rust Belt states.

“We feel good about where we are,” Biden said in his home state of Delaware, shouting over a din of supporters in cars honking their horns in approval. “We believe we’re on track to win this election.”

During the final days of the campaign, Trump had suggested he would claim victory if ahead on election night and seek to halt the count of additional ballots.

“The president’s statement tonight about trying to shut down the counting of duly cast ballots was outrageous, unprecedented, and incorrect,” Biden’s campaign manager Jen O’Malley Dillon said in a statement.

Global stocks gyrated in early trade as results streamed in, with a final call now seen unlikely for days and the outcome raising the potential for gridlock that complicates the chance of a quick U.S. government spending boost to counter the effects of the pandemic.

“We are up BIG, but they are trying to STEAL the Election. We will never let them do it. Votes cannot be cast after the Polls are closed!” Trump, 74, tweeted before his White House appearance. Twitter swiftly tagged the tweet as possibly misleading.]

“It’s not my place or Donald Trump’s place to declare the winner of this election. It’s the voters’ place,” Biden said on Twitter in response to the president.

It was not clear what Trump meant by saying he would ask the Supreme Court to halt “voting.” However, legal experts have said the election outcome could get bogged down in state-by-state litigation over a host of issues, including whether states can include late-arriving ballots that were mailed by Election Day.

Even before Tuesday, the 2020 campaign saw a historic number of lawsuits across dozens of states, as the coronavirus pandemic forced election officials to prepare for an election like no other. Both campaigns have marshaled teams of lawyers in preparation for any disputes.

Ahead of the election, Trump had said he wanted his latest U.S. Supreme Court appointee, Amy Coney Barrett, confirmed by the Senate in case the court had to hear any electoral dispute. Democrats had criticized the president for appearing to suggest he expected Barrett to rule in his favor.

Trump has repeatedly said without evidence that widespread mail-in voting will lead to fraud, although U.S. election experts say fraud is vanishingly rare.

In Pennsylvania, Democratic Governor Tom Wolf said the state still had to count more than a million mail-in ballots and called Trump’s remarks a partisan attack. According to Edison Research, more than 2.4 million early ballots were cast in the state, with 1.6 million by registered Democrats and about 555,000 by Republicans.

The next president will lead a nation battered by a pandemic that has killed more than 231,000 people and left millions more jobless, as well as racial tensions and political polarization that has only worsened during a vitriolic campaign.

The election will also decide which party controls the US Congress for the next two years, and the Democratic drive to win control of the Senate appeared to fall short. Democrats picked up only one Republican-held seat while six other races remained undecided – Alaska, Maine, Michigan, North Carolina and two in Georgia.

After claiming victory in Panjshir, Taliban say they are in full control