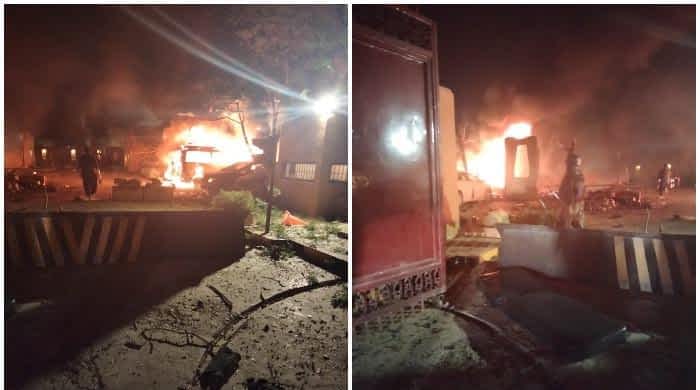 According to police, the blast took place in a parking lot located near Serena Hotel at Sharah-e-Zarghoon.  Per the police, the initial investigation has revealed the explosion was caused when explosive material, planted inside a car, detonated.

Several vehicles parked in the area were damaged due to the intensity of the blast, the police said, adding that the wounded have been shifted to Quetta’s Civil Hospital.

Witnesses say that soon after the blast occurred, a fire brigade arrived at the parking area to put out the fire that some cars had caught. Firefighters were able to extinguish the fire and a cooling process is currently underway.

The Provincial Disaster Management Authority (PDMA) officers arrived at the site to carry out relief activities.

The blast, owing to its intensity, could be heard several kilometres away as well.

Police said it is trying to figure out the intensity of the blast. The area has been cordoned off and an investigation is underway.

Following the blast, Federal Minister for Information and Broadcasting  Fawad Chaudhry said that condemned the blast and said that the Federal Ministry of Home Affairs is in close touch with the Balochistan government and a preliminary investigation related to the blast is underway.

“The government will issue a statement as soon as the nature of the blast and the damage are determined,” he wrote on Twitter.

No ambassador or delegation was present inside the hotel, says IG Balochistan

Speaking to the media, IG Balochistan Muhammad Tahir Rai said that police are still gauging the intensity of the blast and how many kilograms of explosive material was used in the blast.

In response to a question, he said no ambassador or members of a foreign delegation were staying at the hotel when the blast occurred.

Rai said the experts in the police force were conducting their investigation, adding that they would soon make public the findings of the probe.

He confirmed the deaths of three persons in the blast, adding that nine people had been injured. Rai said the blast had damaged five to six vehicles in the parking area.

Balochistan government spokesperson Liaquat Shahwani spoke to Geo News to condemn the incident, describing it as a “terrorist attack” committed by those who did not wish to see Balochistan prosper.

He said an investigation was being carried out and the perpetrators of the blast will not be able to escape the law.

When asked whether the blast resulted due to a security lapse on part of the government, he said the primary responsibility of security rested with the hotel.

Shahwani said the hotel had its own scanners through which guests were inspected thoroughly and that vehicles entering and exiting the parking lot also had to pass through barricades, before they were checked for any explosive item.

When asked whether there were any foreign delegations present inside the hotel when the blast occurred, Shahwani said there was only one “luxurious hotel” in Quetta where envoys and diplomats came to have hi-tea.

North Korea will not join Tokyo Olympics over COVID-19 fears

Complete lockdown to be mulled for Mardan