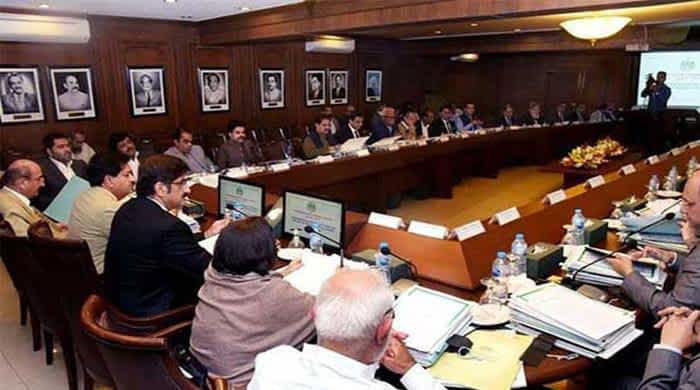 In the five-hour-long meeting of the provincial cabinet on Saturday, Sindh Chief Minister Syed Murad Ali Shah took several decisions including amending the police rules under which an accused could not be arrested without credible evidence.

The cabinet also decided to hand four hospitals under the Karachi Metropolitan Corporation (KMC) over to the provincial health department, procure security featured retro-reflective number plates for vehicles and reduce cotton fee from Rs20 per 100 kilogramme (kg) to Rs10 per 100kg.

The cabinet meeting was here at the CM House. It was attended by provincial ministers, advisers, the chief secretary, Planning and Development Board chairperson and others.

About the provincial development budget outlay for the financial year 2021-22, the cabinet was told that its total estimated value was Rs329.02 billion, which

Shah said that in the first quarter of the new financial year, 603 schemes worth Rs14.098 billion would be completed. He directed the cabinet members to personally monitor the timely execution of those schemes.

She said that 1,669 new schemes for Rs83.716 billion had been launched and the provincial departments should focus on them so that they could be started well in time and completed accordingly.

On the request of the Karachi Metropolitan Corporation (KMC), the cabinet approved the proposal to take over four healthcare facilities of the municipality.

Due to financial issues, the KMC had been unable to operate them properly and was not even paying salaries to the employees in time.

The CM said the provincial government would not get Rs800 million from the KMC for running its hospitals but his government would give an additional Rs603.158 million to the health department to operate those hospitals to provide best health facilities to the people of the respective areas.

The cabinet also directed the local government department to select more local bodies’ health facilities particularly of the district councils so that they could also be given to the health department for proper operations.

On the recommendation of the inspector general of police, the cabinet approved an amendment in rule 26 of the Police Rules 1934 to stop police from making arrests merely on account of registration of an FIR.

After the amendment, police officials would be required to collect credible evidence of involvement of the accused in any crime and seek approval from senior officers beforehand in order to arrest the person named in the FIR.

This amendment would stop police from making unnecessary arrests of people.

It may be noted that the excise and taxation department collects the cotton fee in the province.

The excise and taxation department gave a detailed briefing on the special retro-reflective number plates for all kinds of vehicles to be manufactured by the National Radio & Telecommunication Corporation (NRTC).

The cabinet approved the proposal of the excise department to negotiate with the NRTC for the procurement of the security-featured retro-reflective number plates for all types of vehicles, including two-wheelers, three-wheelers and four-wheelers.

The CM directed the excise department to expedite the matter so that the new number plates could be issued to the vehicles in the province as soon as possible.

in Karachi from imposition of the Sindh sales tax.

The Sindh Revenue Board has worked out that the exemption, if approved, would cost around Rs1.2 billion.

The cabinet opposed the exemption request on the pretext that it would set a new trend. Therefore, the CM proposed that the project was being executed in the city, therefore the Sindh government should pay the SST amount on behalf of the NDMA. The cabinet approved the proposal.

On the request of the Chinese consulate in Karachi, the cabinet approved a proposal to hand over to them a vacant plot of the Pakistan Tourism and Hotel Management Institute under the Sindh culture department, which was located next to the consulate.

In exchange for the plot, the consulate had offered a 2,000-square-yard plot to the culture department. The cabinet approved the proposal.