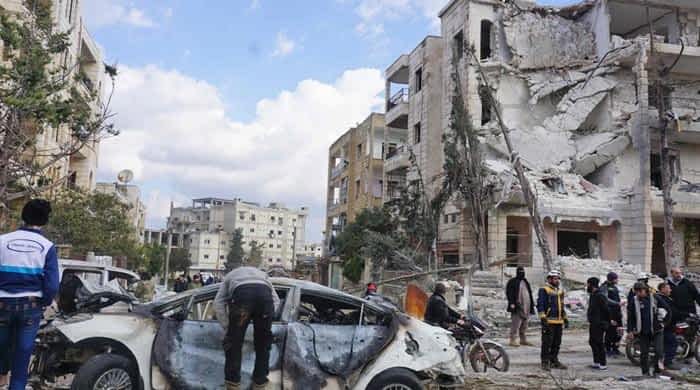 The remains of a car which exploded following a double attack in Syria’s Idlib city. February 18, 2019. — AFP/Files

BEIRUT: A car bomb in the Turkish-controlled town of Al-Bab in northern Syria killed eighteen people, including at least 13 civilians, a war monitor said.

The explosion near a bus station in the town also wounded at least 75 people, some of them seriously, the Britain-based Syrian Observatory for Human Rights reported.

Turkey and its Syrian proxies control several pockets of territory on Syria’s side of the border following three military incursions since 2016.

There was no immediate claim of responsibility for the car bombing, but there has been a string of attacks in Al-Bab since its capture by Turkish troops from the Daesh in 2017.

The town, 40 kilometres (25 miles) northeast of Syria’s second city Aleppo, was one of the western-most strongholds of the extremists’ self-styled territorial “caliphate”.

“We condemn in the strongest terms these ongoing indiscriminate attacks on civilians,” senior UN humanitarian official Mark Cutts wrote on Twitter after the latest bombing.

US-backed Kurdish forces seized the last scrap of the statelet from the extremists in eastern Syria in March last year.

Syria’s civil war has killed more than 380,000 people since it started with the repression of anti-government protests in 2011.

After a campaign like no other, Americans rendering final verdict at polls