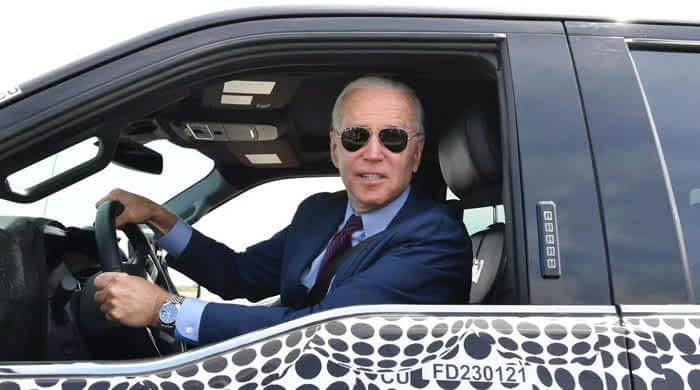 The battery-powered Ford F-150 Lightning is due to be unveiled on Wednesday as the auto giant´s new big bet on the emerging electric auto market. But avid car enthusiast Biden not only got a sneak preview Tuesday — he managed a test drive.

Streaking across the enormous tarmac expanse of Ford´s proving grounds in Dearborn, Michigan, with just a Secret Service agent in the passenger seat for company, Biden appeared to be living his dream.

The pickup truck, almost silent, flashed across the hot, hazy surface before turning back to journalists accompanying the president.

At 78, Biden is the oldest person ever elected to the White House but at the wheel he acted more like a giddy teenage driver.

The Lightning can hit 0-60 mph in about 4.4 seconds, he marveled, prompting a moment of consternation among Ford executives who had wanted to keep details like that secret until launch day.

When queried by a journalist whether she could ask him a question about ongoing fighting in Israel, Biden snapped in a mock rebuke: “No you can´t. Not unless you get in front of the car as I step on it.”

How fast had he managed to go? Now that did interest him.

Journalists, Ford executives and White House staffers hurriedly got out the way.

Biden floored the accelerator to disappear across the tarmac a second time.

Biden was racing around in a yet-to-be-sold Ford truck to promote his $2 trillion infrastructure plan. In addition to rebuilding standard stuff like roads and bridges, Biden´s package would pour $174 billion into electric vehicle development.

Getting to Michigan required a 10-minute flight in a helicopter, 90 minutes of aviation fuel in Air Force One and 15 minutes riding in a gas guzzling motorcade comprising dozens of non-electric cars.

But Biden had no doubt about what the future should look like.

“We´re at a great inflection point in American history,” he said in a speech on the floor of Ford´s shining factory. “The future will be built right here in America.”

Biden talked about the fight to “save the planet” from global warming. But he was just as worried, if not more so, by China and what he sees as a contest for electric supremacy.

“The only question is whether we will lead or fall behind,” he said.

“They think they´re going to win,” he said. “Well I´ve got news for them: They will not win this race.”

Most politicians court car owners and auto union workers. In the United States, iconic companies like Ford and cars in general are even more important, serving as patriotic backdrops for speeches about American independence and exceptionalism.

But Biden´s trajectory really is bound up in cars.

A 1972 crash that killed his first wife and baby daughter would overshadow the rest of his life.

An affinity for automobiles has also been integral to the way Biden presents himself — a “regular Joe” who, despite being a senator for four decades and a vice president for eight years, remains happy to discuss the finer points of tires or torque.

As president, his main ride is the heavily armored “Beast” limousine. Secret Service protocols — Tuesday´s joy ride aside — mean he can no longer get behind the wheel.

Nevertheless, Biden still refers frequently to his treasured 1967 green convertible Corvette Stingray, a wedding present from his father, who was a car dealer.

The Corvette is a muscle car, a noisy, throbbing statement about as far as you can get from the quiet, environmentally responsible electric movement.

But it is part of the Biden brand — and perhaps Biden soul.

“I like speed,” he told Jay Leno during a 2016 television auto show when he was vice president.

Touching the huge battery installed in the F-150´s low-slung chassis, he said: “fascinating.” He sounded like he meant it.

When it was time to go to the podium and address Ford workers, executives and Democratic politicians, the president began with a self-introduction.