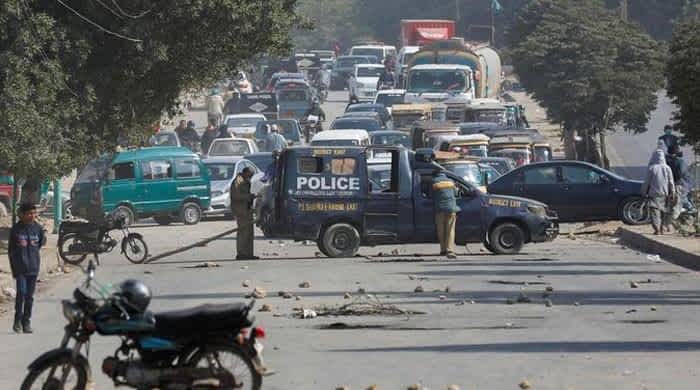 Infuriated by Prime Minister Imran Khan’s statement that equated the demand of Quetta protesters for his visit with “blackmailing the premier”, Shia groups and the Hazara community expanded their protest sit-ins against the Machh tragedy to more locations in Karachi, blocking multiple major roads in the city that resulted in not only massive traffic jams but also clashes between protestors and commuters.

As the bereaved families in Balochistan have not buried the bodies in protest and are demanding that the prime minister pay a visit to them, Shia groups, including the Majlis Wahdat-e-Muslimeen (MWM), Shia Ulema Council, Jafria Alliance, Imamia Students Organisation, and Jafaria Students Organisation, and the Hazara community has been holding sit-ins on various roads of Karachi to express solidarity with the families.

But after Prime Minister Imran Khan’s statement on Friday in which he said that the condition of his visit to Quetta for the bodies to be buried was tantamount to blackmailing him, the Shia groups announced their decision to expand their protests to more areas of the city.

A group of Hazara community members organised a sit-in near the Governor House in the night to express their anger at the PM’s ‘insensitive statement’.

The protesters, who had come from various Hazara-populated localities such as Hussain Hazara Goth and Manghopir, raised slogans against the government’s failure to arrest the terrorists who have been targeting the Hazara community over the years.

The participants also criticised the government and security forces for what they called their slack attitude in arresting the terrorists involved in the killings of members of the Hazara community.

At the main sit-in camp set up by the MWM at Numaish Chowrangi, the party’s provincial political secretary Ali Hussain Naqvi criticised the ineffectiveness of the National Action Plan (NAP) and said the government remained unmoved by the ongoing peaceful protest sit-ins, particularly in Quetta by the heirs of the Machh victims in the freezing cold weather.

He said the PM’s statement had rubbed salt into the wounds of the victims’ families. “They have been waiting for you [PM] for six days for the burial of the bodies of their loved ones and you are accusing them of blackmailing,” he exclaimed.

“It is part of our faith to raise voice in support of the oppressed. A Muslim cannot carry out a terror act like the Machh mishap,” Naqvi remarked. “The war between truth and falsehood is still going on in the world today.”

He said terrorists have been killing professionals, including doctors, engineers, scholars, and businessmen, belonging to the Shia community with impunity. “How long will the stage of unknown terrorism last in the country. Killers are roaming freely in the country,” he asserted.

The MWM leader also praised Karachi’s residents for supporting the ongoing protests across the city. Delegations of the various political parties and civil society groups also visited the sit-in camp that was entered on the fourth day on Friday, expressed sympathies with the Hazara community and demanded the federal government must fulfil all the demands raised by heirs of the victims.

Showing solidarity with the protesters in Quetta and condemning Prime Minister Imran Khan’s statement, labour leaders and workers in a rally said the state had badly failed to provide

protection to the Hazara community that had been under attacks for the past several years.

The Home-Based Women Workers Federation (HBWWF) and National Trade Union Federation (NTUF) jointly organised a march from the Fawara Chowk to the Karachi Press Club, in which a large number of workers demanded early arrests of the killers of the miners in Machh.

Labour leaders and civil society activists said that despite the presence of security officials, the brutal murder of innocent miners was worrisome. They added that the Hazara community was facing a genocide-like situation and the government had failed to give them protection.

“The heirs of the killed labourers have been protesting on a road in Quetta in freezing cold but the government institutions have failed to meet their just demands,” said HBWWF leader Zahra Khan.

NTUF Central President Muhammad Rafiq Khan said the brutal killings of 10 mineworkers in Machh would continue to haunt the ruling forces for a long time to come.

Other speakers said workers belonging to the mining sector had already been facing a lot of problems. Industrial mishaps in mines have become a routine and the government has not taken any steps to check them, it was said.

They also demanded that the working conditions of the mineworkers be improved and the heirs of the slain workers be paid compensation. They further demanded that the heads of federal and provincial security agencies be sacked for their failure to provide

protection to the Hazara community.