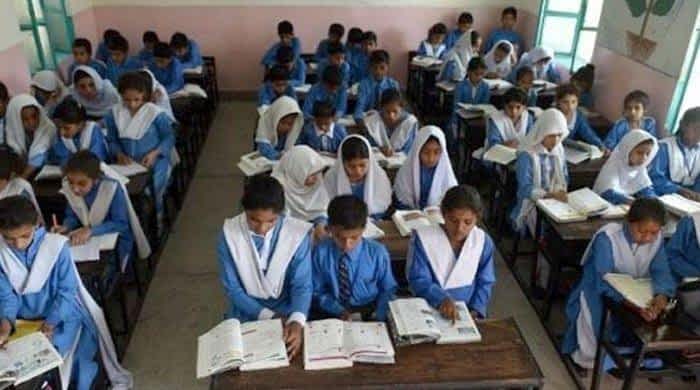 The minister took to Twitter to share the decisions taken during a meeting of the health and education ministers of all four provinces.

He announced decisions taken during the special meeting with consensus.

The minister said classes of grades 9-12 will begin in affected districts in a staggered manner so students can prepare for their upcoming board exams.

“A special meeting of Health and Education Ministers of all provinces and AJK/GB was held today. The following decisions were taken with complete consensus. 1) Classes 9 to 12 would commence in affected districts in a staggered manner to allow students to prepare for Board exams,” he tweeted.

As the minister had announced earlier, exams for classes 9-12 will take place according to the new dates announced by boards. He said this will not begin before the fourth week of May.

Cambridge will not give teacher assessed grades for Pakistan

Mehmood said Cambridge had announced it will not give teacher assessment grades this year hence those not appearing for the exams this semester can do so in October and November.

“Meeting was also informed that Cambridge has decided not to give teacher assessed grades this year therefore those not taking exams will take them in the next cycle Oct/Nov. Cambridge also assured that all SOPs will be strictly followed,” he tweeted.

The minister revealed that classes from 1-8 will remain closed, with the details to be provided by provinces later.

On April 6, Mehmood had held a press conference where he had announced the decision that in-person classes for grades 1-8 throughout the country would remain suspended till April 28.

Here are some of the key points that were discussed during the meeting and revealed by the minister:

In “affected districts” only, on-campus classes till grade 8 will be suspended till April 28NCOC to decide whether this closure will be extended till Eid or notClasses of students of grades 9, 10, 11 and 12 to resume from April 19 onwardsExams of grades 9 – 12 to be shifted to third week of MayUniversities in affected districts will also remain closed, shift classes onlineO/A level exams to be held as per scheduleShafqat Mehmood says Cambridge has assured coronavirus SOPs will be followed strictly during exams