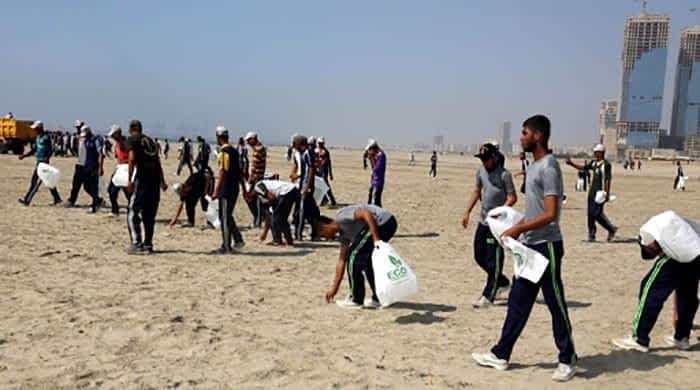 The District South administration in collaboration with the Student Help Association launched a campaign on Saturday to clean up the Clifton beach.

The wife of cricket legend Wasim Akram, Shaniera Akram, specially participated in the drive along with South Deputy Commissioner (DC) Irshad Ali Sodhar and others. According to a statement issued by the District Municipal Corporation (DMC) South, the DMC provided logistic support and machinery for the drive.

Speaking on the occasion, Sodhar said cleanliness of the Clifton beach would be maintained on a regular and permanent basis. He added that the sea was the identity of Karachi.

“Our coast is in no way inferior to any other in the world,” he said, adding that the civil society would also be involved in this campaign. He urged the media to play its role in creating awareness among the citizens regarding cleanliness of the beaches.

The South DC said he was grateful to Shaniera for raising the issue of the Clifton beach, after which the civil society turned it into a campaign. Shaniera said Karachi was her city and she was very attached to it. “We have to provide a clean environment to the new generation,” she remarked.