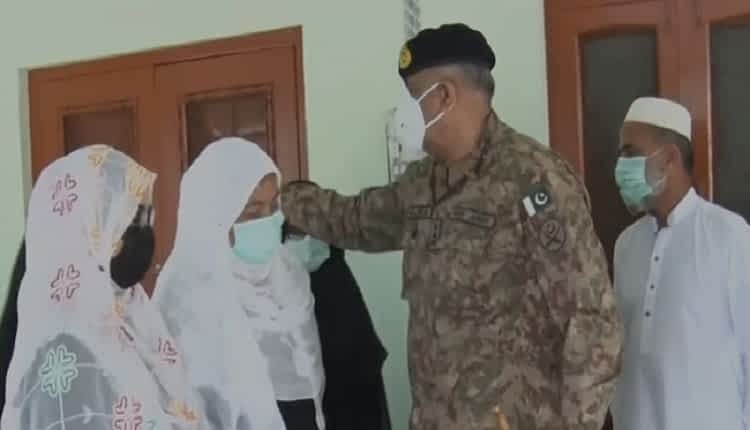 Chief of Army Staff (COAS) General Qamar Javed Bajwa and his wife visited the family of Shaheed Captain Basit Ali at his native village near Haripur.

The army chief prayed for the departed soul and offered Fateha. While interacting with the family of the martyred personnel, COAS Bajwa said that nothing is greater than laying down one’s life for the defence of the country.

“Entire nation is proud of the ultimate sacrifices rendered by our national heroes.” The army chief also reiterated the firm resolve of the Armed Forces against enemies of Pakistan.

Earlier, Chief of Army Staff (COAS) General Qamar Javed Bajwa had visited the western border contiguous with Afghanistan to spend Eid al-Adha with troops and to uplift their morale and resolve.

According to ISPR, Gen Bajwa had commended the commitment and professionalism of the troops posted there. He also lauded the border security arrangements and operational preparedness.

COAS Gen Bajwa had also acknowledged the border fencing while noting that Pakistan stood resolute in facing whatever challenges that may emerge.

He had reassured the troops that the renovation and building of new infrastructure will have all the necessary support in cooperation with the administration.