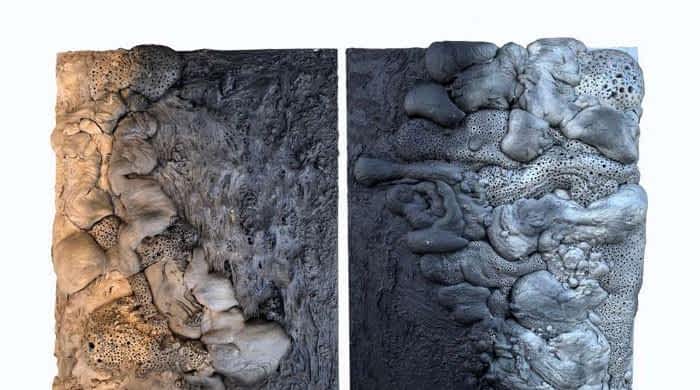 Graduated from the National College of Arts (NCA) Anusha Ramchand told The News how she aims to channel her interest into expressing her opinion regarding identity, gender stereotypes and popular culture in an attempt to dissect traditional and contemporary schools of thoughts and question their validity and relevance on a superficial level. Titled ‘I Do(not) Belong Here’ painted wood and MDF models- variable/platform revealed the same.

An MA in Art Education Aroosa Naz Rana is an emerging artist and an educator. Her works – an amalgamation of ideas – often come with a baggage of history. They reflected technological advancement, media and sciences of the time. Her work titled ‘Probability Predictability’ has patterns of thought usually correspond to the time period they belong to.

A Bachelor in Fine Arts from National College of Arts Bushra Waqas Khan’s artwork in vinyl and acrylic variable titled ‘Smile Please’ was reflective of her usual work using the state paper, ‘Affidavit’ motif in her pattern, positioning it strategically by doubling or repeating it – the most celebrated trait of her practice.

Hiba Schahbaz depicted women’s bodies while referencing self portraiture, creating a space for herself and other women to tell their stories and reclaim their histories. A painting titled ‘Protection’ in Gouache, watercolour, gold leaf and tea on wasli following the same style. Her practice has expanded from miniature painting to human-scale works on paper.

Howra Batool’s work spoke about suffering, certain events and experiences that play a vital part in the transformation of an individual. Her work titled ‘Beyond You’ was presented in mixed media on canvas visually spoke of bodies, masses and their existence. She expressed them through playing with the language of different materials, which is executed by understanding the certain material and then interpreting its language or fusing it into another.

Humaira Abid is one of a small number of female sculptors to rise to the top of her field.

A sculptor titled ‘Mother and Child III’ carved in pinewood showed her commitment to her artistic career that can also be witnessed at different exhibitions and art fairs she participated in. She has also received ‘Art Innovator Award’ this year.

Jovita Alvares explored the nuances of daily life through the ever-evolving themes of urbanism. She had a great interest in the everyday life of the city. It can be seen in her work titled ‘Saw’ in lenticular print. Through frequent documentation and re-documentation she investigates urban aspirations of security as well as a contrasting need to beautify the space by building floral façades over bleak and rigid urban planning. The resulting artwork become like specimens of her journey and experience, and allows the viewer to see the city from her vantage point.

Karen Frank is a visual artist, puppeteer and teacher. Her works focuses on depicting the day to day activities of life and the suffocation one feels, by using polythene bags.

Her works titled ‘Donkey Cart’, ‘Bus Window’ and ‘Women and Children’ tends to convey the message of lack of space. The impact of overlapping figures has always been a source of stimulation for her. The bright colours polythene bags on the contrary make it visually appealing. Her work is heavily influenced by her puppetry experience at Sesame Street and Rafi Peer.

Maha Ahmed used traditional Persian miniature painting and classical Japanese landscape painting techniques, specifically the Yamato-e style. Her works titled ‘Lost Light in a Cave’ and ‘From Emptiness to the Song Within I’ in Gouache on paper she used kumokasumi (clouds and mist in Japanese) as a way of creating negative spaces that depict the intangible boundaries created by the formation of collective narratives that stem from signifiers such as gender and race.

A graduate from the National College of Arts, Lahore and an MFA from University of British Columbia Madiha Sikander works with found objects, such as books, newspaper images, and family photographs, as well as items from flea markets.

Her works titled ‘The Babu’, ‘The Pirate’ and ‘The Other Indian’ in water colour on paper addresses historical erasure and memory, notably in relation to representation. She works with the entangled relationship between the colonizer and a the colonized through the use of costumes.

Marium M Habib graduated from Wimbledon College of Arts, University of the Arts London, with a degree in Fine Art. Titled ‘The Bad Feminist I’ her paintings in oil on canvas showed slightly abstracted figurative works depicting scenes and subjects from her personal life. She uses them to construct psychological narratives as she explores identity, culture and gender.

Misha Japanwala graduated with a degree in Fashion Design from Parsons School of Design in New York. Her works titled ‘Anila Neckpiece’ and ‘Jyoti Ring’ lies on the borders of fashion and fine art, with her garments taking the form of sculptural body casts to explore what it means to be a woman in all its facets. Her debut collection Azaadi, featured in publications such as Vogue, Harper’s Bazaar and WWD, was homage to the strength of Pakistani women in the face of domestic violence, moral policing and taboos surrounding female sexuality.

Rubaba Haider in her work titled ‘The spider’s touch, how exquisitely fine! Feels at each thread and lives along the line’ redefines the traditional Hazaragi techniques of weaving and embroidery through using these materials in an unorthodox way. She chooses to subvert these traditional crafts by incorporating cultural metaphors from everyday life in form of fabrics, threads, knots and needles, to depict the fragility of relationships, and the significance of locating and relocating. She works across multiple disciplines from linear drawings to miniature paintings in gouache.

Saba Qizilbash has a graduate from the National College of Arts and a Masters degree in Art Education from Rhode Island School of Design, USA. Her work titled ‘Karachi to Lucknow’ in Graphite and wash on water colour board focused on the hemming of divided/disputed land through detailed urban infrastructural solutions. She draws painstakingly detailed drawings suggesting dystopic cities, routes and urban layouts that help territorial interruptions. In her travels, she identifies and isolates images of loneliness and delimitations based on observing fences, boundary walls, gates and railway tracks.

Sadaf Naeem through her work titled ‘Entrance’ in acrylics on canvas used a visual language and tries to create a narrative of her surroundings. Her work was more about relationship between space and illusion. It is a world of shadows, densities and shapes woven into pleasurable spaces.

Sara Mahmood’s work explored the relationship between present discourse and its uninvited conversations. With diverse influences, new discussions are created from both explicit and implicit narratives. She has always been fascinated by the theoretical limits of the human condition. It is this limit that created her work.

Shahana Munawar’s work titled ‘A Dil e Nadaan I’ talked about the conflicts between mind and heart. The heart is not just a blood pumping organ that keeps us alive but it is also considered to be the center of our emotions. The references of the heart and its metaphors are used in abundance throughout poetry around the world. She used artificial hearts for her poetic narratives by paintings them accordingly.

Sheema Khan graduated from Karachi University with a distinction in miniature painting and ceramic. Through her work titled ‘The Matter of Absence’ in wood, terracotta, gouache on wasli she explored the process realization of the purpose of life. Self realization is to experience the entire process within you and become one with the process of life. From this moment you always know the deeper meaning like death, absence and empty spaces. Her work points towards the moment in which object and the subject play a very important role.

Zara Mahmood specialized in Printmaking from the National College of Arts (NCA) and pursued a Master’s program in Fine Art at the University for the Creative Arts (UCA), UK, with a focus on Painting. Her practice focused on drawings she captured natural light and its ephemeral manifestations on different surfaces. Her work titled ‘When I Had the Sea All to Myself’ in digital print on acrylic sheets showed images evoke parallels to the rituals and routines that constitute life on a daily basis; that leave no physical impressions or marks. Her process of image-making takes form in digital prints on acrylic sheets, photo transfers, and drawings on paper.

Zeerak Ahmed exploring expressions of the elusive medium of sound through voice, she produces sound sculptures, installations and performances. Titled ‘Passage Calls’ in Steel on wood she maps out the sonic spaces that reside within; imagined passages for elusive calls. Channeling notes from the base, chest, throat, nose and head, she drawn out herself.

Minor dies after being attacked by stray dogs