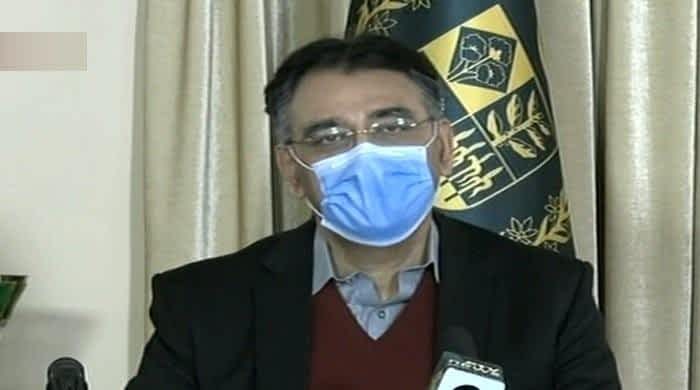 Federal Minister for Planning, Development, and Special Initiatives Asad Umar addressing a press conference on the coronavirus situation in the country. Photo: File

ISLAMABAD: The Federal Minister for Planning, Development and Special Initiatives Asad Umar on Tuesday addressed a press conference alongside   Special Assistant to the Prime Minister on Health Dr Faisal Sultan to discuss the coronavirus situation in the country and warned the masses to strictly take precautions.

As reported by Geo News, the minister said that in view of the ongoing situation, which arose over the last three weeks, Pakistan will be pushed back to a similar situation that it faced in June if coronavirus standard operating procedures (SOPs) are not followed.

“At that time (in June) more than 1,750 people across the country suffered from COVID-19-related complications and were in urgent need of oxygen. Meanwhile, others had to be shifted to ventilators,” he said.  “People were concerned about not finding beds in hospitals as infections had peaked during the first wave. We will witness a similar situation if we don’t follow the SOPs.”

The minister said that the government had already anticipated that if people stopped taking precautions, the situation would worsen, adding that he started issuing warnings in October.

Speaking about the measures the government took earlier this year to successfully contain the virus, for which Pakistan was lauded by the world, Asad Umar said that mosques had played an important role in spreading the message at that time.

“Gradually, however, mosque-goers stopped following the SOPs. We will direct provincial administrations to request ulema and mosque imams once again to tell people to take precautions.

He also briefly touched upon the decisions of the National Coordination Committee (NCC), according to which schools have been closed and public gatherings and indoor dining have been banned.

Appealing to the political parties of the country who are arranging rallies despite the looming threat of the virus, Asad Umar said that the National Command Operation Center (NCOC) had already imposed a ban on public gatherings with the approval of the Islamabad High Court, but the decision fell on deaf ears.

“It is the responsibility of political leaders to spread awareness among the masses regarding the infection. I would myself fail as a politician if I endanger people’s lives and livelihood by holding large gatherings,” he said.

Towards the end of his press briefing, Asad Umar requested the masses to follow some simple steps to keep themselves safe from the potentially deadly infection.

“I request the people of Pakistan to follow simple measures like not shaking hands, wearing masks, using hand sanitizers, and observing social distancing to control the pandemic,” said Asad Umar. “If we follow these easy steps, Allah will save us from the virus, just like He did during the first wave of the pandemic.”

Bettors stampede back in favor of Biden as results stream in