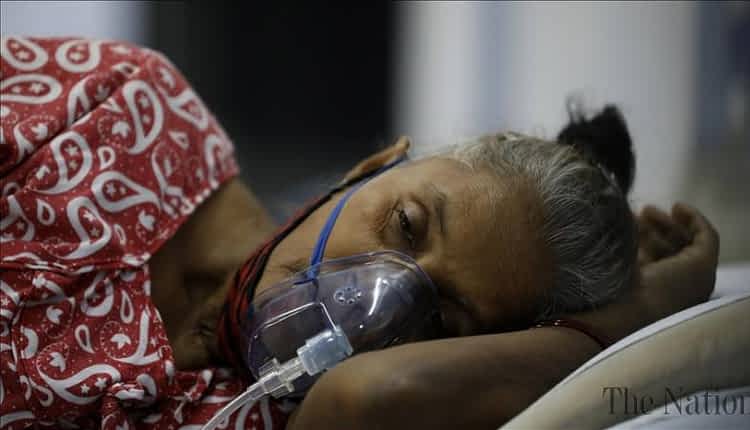 When 45-year-old Veenu Arora, a resident of northern India developed swelling in her eye, days after she tested COVID-19 positive, little did her family know that she had caught a deadly fungal infection known as mucormycosis.

Arora was driven to a hospital in northern Rajasthan state, from where she was referred to the Indian city of Chandigarh for specialized treatment.

“Doctors did a surgery and her right eye had to be removed to prevent spread of infection to the brain. We were hopeful of her survival,” Arora’s husband Suresh Chhabra told Anadolu Agency.

“But we don’t know what happened suddenly, she passed away on May 22.”

Arora is not the only victim of the deadly infection.

India is currently battling the second wave of the coronavirus pandemic. The death toll has crossed 300,000 mark, but the country is now entangled in a new challenge in the form of mucormycosis – a fungal disease with a high mortality rate that is commonly referred to as “black fungus.”

In many cases doctors are removing the one eye of patients to prevent the spread of infection.

Ved Praskash, 60, from Haryana state was admitted to a hospital on May 5 for COVID-19 treatment. By the time Prakash, a diabetic patient was discharged from the hospital, his vision in one eye was already gone.

“His eye color had changed and there was swelling in the entire area. The infection had affected the nose and eye,” his son Abhimanyu Sharma, said.

“On May 14, I took him to another hospital, where the doctors did a surgery and removed his right eye to save his life. The dangerous fungus had eaten into a large portion of his facial tissue, including his right eye,” Sharma told Anadolu Agency.

He added, “He can’t see anything now from his right eye, but doctors saved his life at least.

Mucormycosis is a dangerous fungal infection which mainly affects people who have a weak immune system causing loss of eyesight, removal of the nose and jaw bone. The diabetic patients have been underlined as high risk people by experts from All Indian Institute of Medical Sciences (AIIMS).

With India witnessing an unprecedented rise in COVID-19 cases, the cases of Mucormycosis have doubled the strain on hospitals.

While the Indian government has not released data about the severity of this fungal infection, the country’s Minister of Chemicals and Fertilizers, Sadananda Gowda informed on Twitter on May 26 that 11,717 patients were receiving the “black fungus” treatment across the country.

According to a leading microbiologist Dr. Arunaloke Chakrabarti, Incharge of Center of Advanced Research in Medical Mycology in northern India, there has been an exponential rise of Mucormycosis in the country this year, putting extra pressure on health management.

He lists four factors responsible for the present cause of the epidemic of Mucormycosis in India in times of coronavirus surge.

“First is the patient factor. More than 30% of patients with COVID-19 are diabetic. Indian population in general are not compliant with anti-diabetic therapy. uncontrolled diabetes makes a very fertile ground for the mucor fungus to enter,” he told Anadolu Agency.

Chakrabarti said the second factor which causes this deadly fungal infection is the “indiscriminate and inappropriate steroid use” during the treatment of coronavirus patients.

“During the second wave…doctors did not have time for complete management of any patients. Glycaemic control of diabetic patients was neglected and to compensate for the oxygen crisis, doctors prescribed higher doses of steroids for a longer period to manage oxygen desaturation. The steroid further deranged blood sugar, the level of blood sugar went through the roof…,” he said.

“The third factor is COVID-19 virus itself, as it damages the beta cell of pancreas, altering iron metabolism, so free iron was available for Mucorales [Mucormycosis] to eat. Iron is good food for Mucorales.”

The fourth factor is the country’s environment, says Dr. Chakrabarti. “Both indoor and outdoor environments in India contain large numbers of Mucorales spores, which via air go to the respiratory tract of vulnerable patients to cause mucormycosis,” he said.

Stating that the awareness among doctors is low about fungal infections, Chakrabarti maintains the infrastructure to fight the disease is also very low.

“There are very few laboratories that are competent for diagnosis of mucormycosis,” he said. “We have also suggested opening post COVID-19 clinics where ear, nose and throat (ENT) doctors should be included, so that people can visit the facility and provide treatment.”

Asked the reasons why cases have not increased in other countries that have seen a coronavirus surge, the renowned microbiologist says India is always considered the capital of mucormycosis of the world.

“Even before this epidemic the prevalence of mucormycosis was 70 times higher in India compared to the rest of the world. So, during this pandemic, besides uncontrolled diabetes and environmental issues, indiscriminate steroid use played a major role for this upsurge,” he said.

How can cases of Mucormycosis be prevented? The Indian Mycologist, who is the president of International Society of Human and Animal Mycology, believes good blood glucose control, and no use of steroids in patients without oxygen desaturation are some of the measures.

“We had conducted a study that after a mean period of 18 days of COVID-19 diagnosis, they [patients] acquired this infection. So by 18 days, most of the patients developing mucormycosis are already discharged,” he said.

“Doctors while discharging coronavirus patients, especially diabetics should advise about the early signs of mucormycosis…when patients develop such symptoms should rush to the hospital.”

According to Chakrabarti, the rising cases have burdened the already strained health system and now there is a scarcity of drugs as well .

“We have almost three days waiting period for surgery at our centre for these patients, though immediate surgery is recommended,” he said. “Then there is the antifungal drug issue. Due to unprecedented demand for the drug, there is scarcity.”​​​​​​​