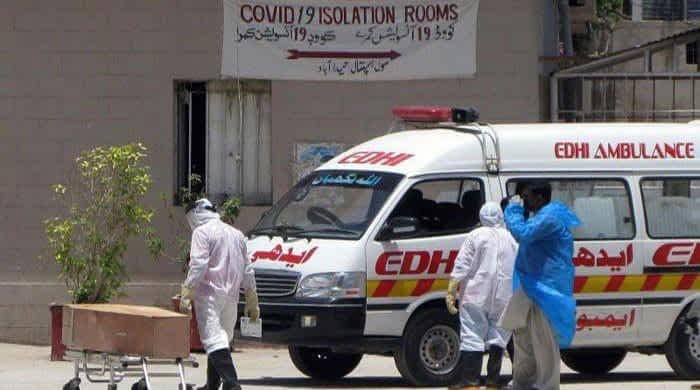 Twenty more people have died due to Covid-19 and another 954 cases have been reported during the past 24 hours in Sindh, with the death toll due to the viral disease reaching 3,813 in the province.

Chief Minister Syed Murad Ali Shah said in his daily situation report on the health emergency on Monday that 10,600 samples were tested in the past 24 hours, resulting in 954 people, or nine per cent of those who were screened, being diagnosed with Covid-19.

The provincial government has so far conducted 2,587,663 tests, which have resulted in 236,530 positive cases, which means that 9.14 per cent of those screened have been found to be infected, he added.

Shah said that after the latest deaths, the rate of the diagnosed people who have lost their fight with Covid-19 stands at 1.61 per cent in Sindh. He said that 18,486 patients are currently under treatment: 17,518 in self-isolation at home, 13 at isolation centres and 955 at hospitals, while 870 patients are in critical condition, of whom 92 are on life support.

He added that 607 more people have recovered during the past 24 hours, increasing the number of cured patients to 214,231, which shows the recovery rate to be 90.57 per cent.

As for the other districts of the province, Shaheed Benazirabad has reported 41 new cases, Hyderabad 35, Mirpurkhas 20, Matiari 16, Thatta, 13, Tando Muhammad Khan seven, Shikarpur six, Kambar and Sanghar five each, Jamshoro four, Tando Allahyar, Umerkot and Ghotki three each, Khairpur and Naushehroferoze two each, and Dadu, Jacobabad, Larkana and Sukkur one each, he added.

The chief executive reiterated his appeal to the people of Sindh that they should comply with the standard operating procedures issued by his provincial government.

Experts recently pointed out that Covid-19 cases have started surging again in Karachi as its current cold weather with moderate humidity is most suitable for the spread of the virus, while its dense population with millions living in slums and regularly-held “super spreading events” are other contributing factors behind the surge.

“Cold weather with moderate humidity in the range of 45-60 per cent is the ideal weather for the spread of the coronavirus and that is why its cases are surging in Karachi,” Dr Shahzad Ali Khan, a professor of public health at the Health Service Academy, Islamabad, said.

Dr Khan said that another contributing factor behind Karachi’s high positivity rate was its dense population where millions of people were living in areas and houses with little ventilation and space. He added that the holding of “super-spreading events” was also a regular feature which was contributing to the spread of the coronavirus in the port city.

“Super-spreading events are events where people are regularly interacting with each other without adopting any preventive measures, and this is happening in bazaars, markets and other crowded places, such as large factories, in Karachi. Combined with excellent weather and the dense population, this factor is helping in the spread of Covid-19 in Karachi twice more rapidly as compared to the rest of the country.”

He said that positive cases should be under 10 per cent in any city, but in case of Karachi, it was 15 per cent. The graph showed that after touching 21 per cent in the first wave in Karachi, the rate of positive cases declined in the city, but now it was again on the rise, which should be a cause for concern for both the people and the authorities.

Another expert, Dr Tahir Hussain, said that apart from the callous attitude of people in Karachi, there was no serious effort made by any government agency to enforce the SOPs announced by the provincial government.

“It seems they have given up. You can see that in weddings, markets and on the roads. They issue instructions just on paper but do nothing to enforce it. Enforcement requires honesty and dedication as the way is littered by corruption. It seems there is a public-private partnership in not enforcing the SOPs.”