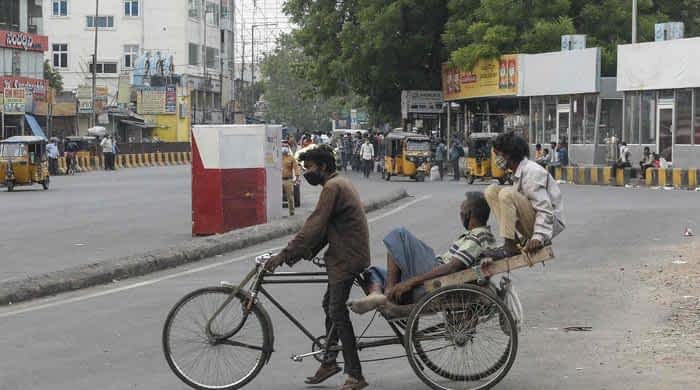 Labourers sit on a rickshaw outside a railway station during a lockdown imposed to curb the spread of the COVID-19 coronavirus, in Secunderabad the twin city of Hyderabad on May 31, 2021. — AFP/File

And the labour market crisis created by the pandemic was far from over, the UN’s International Labour Organisation warned in a report.

Employment was not expected to bounce back to pre-pandemic levels until 2023 at the earliest, it said.

The ILO’s annual World Employment and Social Outlook report indicated that the planet would be 75 million jobs short at the end of this year compared to if the pandemic had not occurred.

And it would still have 23 million fewer jobs by the end of next year than would otherwise have been the case.

COVID-19 “has not just been a public health crisis, it’s also been an employment and human crisis”, ILO chief Guy Ryder told reporters.

“Without a deliberate effort to accelerate the creation of decent jobs, and support the most vulnerable members of society and the recovery of the hardest-hit economic sectors, the lingering effects of the pandemic could be with us for years in the form of lost human and economic potential, and higher poverty and inequality.”

The report showed that global unemployment was expected to stand at 205 million people in 2022 — far higher than the 187 million in 2019.

But the situation is worse than official unemployment figures indicate.

Many people have held onto their jobs but have seen their working hours cut dramatically.

While the situation has improved, global working hours are far from having bounced back, and the world will still be short the equivalent of 100 million full-time jobs by the end of this year, the report found.

Global employment is expected to recover more quickly in the second half of 2021 — provided the overall pandemic situation does not worsen.

But that recovery would be highly uneven, the ILO warned, due to inequitable access to COVID-19 vaccines. So far, more than 75 per cent of all the jabs have gone to just 10 countries.

The limited capacity of most developing and emerging economies to support strong fiscal stimulus measures will also take its toll, the ILO said. In those countries, it said, the quality of newly created jobs would likely deteriorate.

The fall in employment and hours worked has meanwhile translated into a sharp drop in labour income and a rise in poverty.

Compared to 2019, 108 million more workers around the world were categorised as poor or extremely poor, meaning they and their families live on less than $3.20 per person per day, the study showed.

“For many millions of people, the working hour losses combined with a lack or absence of social protection” had sparked an “absolutely dramatic” increase in working poverty, Ryder said.

Five years of progress towards eradicating working poverty had been undone.

Tragically, he said, the crisis also appeared to have reversed decades of progress battling child labour and forced labour.

The report highlighted how the COVID-19 crisis had worsened pre-existing inequalities by hitting vulnerable workers harder.

For many of the two billion people who work in the informal sector, where social protections are generally lacking, the disruption has had catastrophic consequences for family incomes and livelihoods.

The crisis has also disproportionately hit women, who have fallen out of the labour market at a greater rate than men, even as they have taken on more of the additional burden of caring for out-of-school children and others.

This, the report warned, had created the risk of a “re-traditionalisation” of gender roles.

“The consequences of this delay and disruption to the early labour market experience of young people could last for years,” the ILO said.

Ryder cautioned that without decisive action, the COVID-19 crisis could scar the global labour market long-term, just as the disease appears to have devastating, drawn-out health consequences for some people.

“Long COVID could become an economic and social phenomenon, not just a medical one,” he warned.

More lives may be lost in future if railways’ upgradation is not carried out: Azam Swati