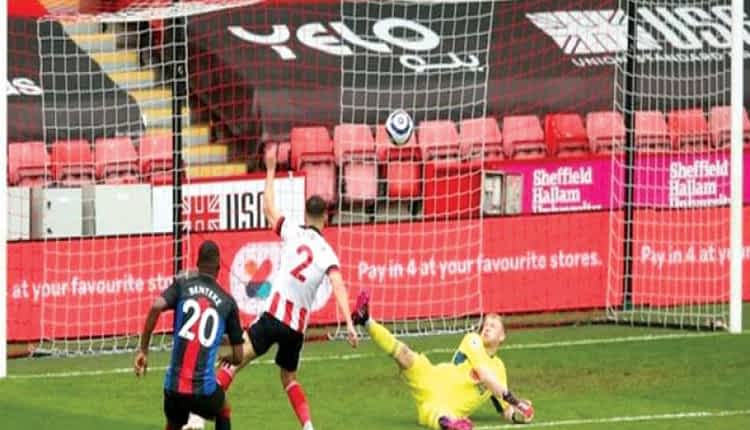 LONDON – Deflected goals from Christian Benteke and Eberechi Eze gave Crystal Palace a 2-0 win at relegated Sheffield United on Saturday, snapping a run of three league defeats for the London club and guaranteeing their top-flight status next season.

The visitors took the lead in the second minute when Eze carved the Blades open with a mazy run and slid the ball to Benteke, whose effort bounced off George Baldock and dribbled over the line. Eze then doubled Palace’s advantage in the 88th, gliding past several challenges before firing a goal-bound effort that took a massive deflection off John Fleck and wrongfooted Aaron Ramsdale. The win lifted Roy Hodgson’s side to 13th on 41 points, 14 points clear of the relegation zone with four games to play. The Blades remain rooted to the bottom of the table with 17 points.

Meanwhile, Tottenham Hotspur’s slim hopes of finishing in the Premier League top four faded as goals from Stuart Dallas, Patrick Bamford and Rodrigo condemned them to a 3-1 defeat at Leeds United in a lively game on Saturday.

Spurs stayed sixth on 56 points from 35 games, five behind fourth-placed Chelsea. Leeds moved two places up to ninth on 50 points.

The home side dominated the first half and Dallas fired them into a 13th-minute lead when he swept a close-range rebound into the roof of the net after Spurs goalkeeper Hugo Lloris parried a mis-hit clearance. Son Heung-min levelled in the 25th with a classy finish after Dele Alli put him through with a defence-splitting pass but Leeds were unfazed and Bamford restored their lead shortly before halftime. It was a sweeping move down the left as Jack Harrison released EzgjanAlioski and Bamford tapped in the defender’s cutback. Tottenham striker Harry Kane had two goals disallowed for offside and the visitors missed several chances before late substitute Rodrigo sealed victory for Leeds when he capped a fast break with a clinical first-time shot in the 84th minute.