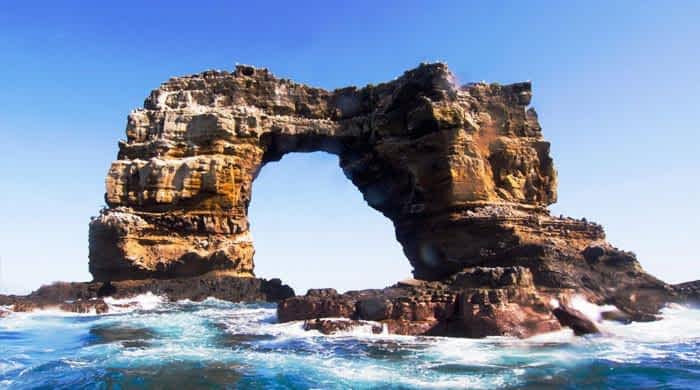 QUITO: The famous rock formation off the Galapagos Islands known as Darwin´s Arch has collapsed due to “natural erosion,” the Ecuadoran Ministry of Environment said Monday.

“The collapse of Darwin´s Arch, the attractive natural bridge found less than a kilometer from the main area of Darwin Island, was reported,” the ministry said in a statement.

The ministry said its collapse was a “consequence of natural erosion” and images distributed by officials show that only the two stone supporting columns remain.

The formation, which is found in the northern part of the archipelago and named after the famous English biologist Charles Darwin — whose study of finches on the islands in the 19th century helped him describe the theory of evolution — is considered a premier diving location.

The Galapagos Islands, some 600 miles (1,000 kilometers) off the coast of Ecuador, contain unique flora and fauna not seen anywhere else on earth and are part of a biosphere reserve.

The archipelago, a World Heritage site, is made up of 234 islands, inlets and rocks. Four of them are home to some 30,000 people.

Mandy Moore gets ready for mama’s night out