Decision on schools’ closure to be taken after next NCOC meeting 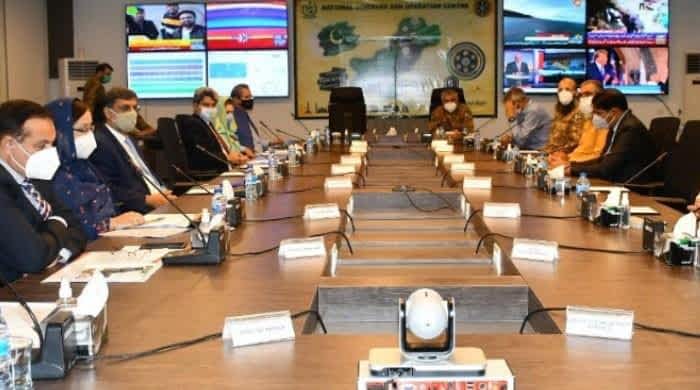 After discussing the third wave of Covid-19 and its effects on education at the meeting of the provincial school education and literacy department’s (SELD) Steering Committee held on Saturday, all the stockholders, including private schools associations, SELD officials and education experts, agreed on keeping the schools open until the provincial task force on coronavirus prepared its final report for the next meeting of the National Command and Operation Centre (NCOC).

Sindh Education Minister Saeed Ghani convened the steering committee meeting on the instructions of Chief Minister Syed Murad Ali Shah after the task force had advised the provincial government to close the schools for at least two weeks. However, in the meeting on Saturday, associations of private schools opposed the closure of schools. They called for continuity of educational activities at the schools.

According to the media coordinator of the provincial education minister, Zubair Memon, the stockholders had a discussion on the possible plan of action to deal with the third Covid-19 wave. “The steering committee was not for taking any decision regarding the closure of schools, but the minister wanted to know the viewpoint of educators in the meeting.”

Memon said that the first suggestion in the meeting came from officials of the education department who recommended deferral of classes from nursery to the seventh grade at schools for the next 15 days.

The second suggestion was about summer vacations. Generally, schools observe summer vacations in May and June but some educators were of the view that the education department had the option of announcing earlier summer vacations from April 15 to May 16. However, private school associations insisted on keeping the schools open as usual.

The media coordinator explained that after getting these suggestions from the stakeholders, the minister concluded the meeting, saying that he would present all the suggestions in the task force meeting so that the provincial government could prepare its final report for the next NCOC meeting.

“The meeting has taken no decision regarding closure of schools,” Memon said.

It is pertinent to mention here that the provincial task force on coronavirus on Friday had suggested to the provincial government that all the schools be closed for 15 days.

As per the task force’s recommendation, the Sindh government has already banned inter-provincial transport in order to contain the virus.

They maintained that the closure of educational institutes would not work to prevent Covid-19 spread until other sectors, including transport, parks, malls, restaurants, cinemas, markets, and political and social events were banned completely.

“If it is necessary to close down the educational institutions in the end, then physical classes for the junior classes should be suspended for two weeks and the policy of online classes or homework plan should be adopted,” the statement read.

The associations said the teaching of the eighth class and senior classes should continue and if the situation worsened in the following weeks, another month could be added to the vacations.

“The closure of private educational institutions would make it difficult for administrations and management to survive and assist the state in educating children,” the statement said.