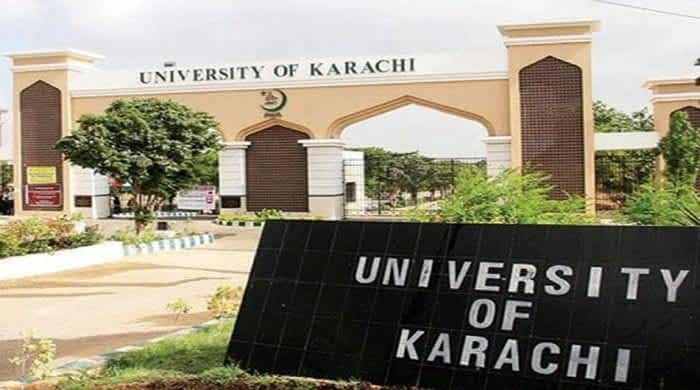 The entrance of Karachi University.

More than 80 state-run colleges affiliated with the University of Karachi (KU) have not announced admissions to their degree programmes for the academic year 2021 due to a decision taken by the Higher Education Commission of Pakistan (HEC) in November last year, which fully enforced the associate degree programme introduced in 2011.

The KU is yet to announce its policy on whether or not its affiliated colleges should offer admissions to the traditional two-year degree programme that has been nullified by the HEC or the two-year associate degree programme sanctioned by the commission.

Owing to this uncertainty, the fate of thousands of students is hanging in the balance. Neither are the colleges offering admissions to the HEC-sanctioned associate programme nor are they able continue with the traditional BA and BSc or four-year BS.

“A majority of the colleges have no capacity to start the four-year BS, whereas, the Academic Council of Karachi University in its two consecutive meetings held in 2017 had opposed the phasing out of two-year degree bachelors and masters programmes. On the one hand, the HEC has already informed the students that two-year degrees will not be verified but on the other hand, the affiliation body [KU] is not ready to accept the HEC policy,” said Munir Alam Khan, a senior member of the Time Scale Sindh Professors and Lecturers Association (TSSPLA).

A notification issued on November 17, 2020, by the HEC read that the commission had phased out two-year programmes after the academic year 2018 and subsequently 2019.

The HEC expressed concern in the notification that those two-year programmes were still being offered by varsities and degree awarding institutes, and their affiliated colleges.

“In this regard, varsities are directed not to offer admission in the two year BA, BSc programs and that the degrees shall not be recognised by the HEC for students enrolled in the programs after December 2018,” the notification read. The commission also posted a message on its official website, warning students not to seek admissions to two-year degree programmes.

However, the HEC also clarified that the degree colleges could start two-year associate degree programmes introduced in 2011.

As per the HEC’s official statement, the decision of abolishing the two-year degree programmes was taken in 2004 with the aim of enhancing the quality of degree programmes as per the international standards. The commission, however, granted a transition period until 2016 to the varsities for phasing out the said programmes.

Commenting on the issue, Munir said the TSSPLA was not in favour of the associate degree programmes because associate degrees had no worth more than that of a certificate or diploma. If those having associate degrees wished to apply for government jobs or in the private sector, they would probably not be considered for jobs, he said.

He said the HEC’s decision would have lasting effects on the education system as it would promote the class system in education. He added that as public colleges had no capacity to offer 4-year BS programmes and state-run varsities had limited seats, the HEC’s decision would create two classes in society as those who could pay millions would get higher education at private institutes and others would be left with just an intermediate certificate.

Such decisions show that the government intends to get rid of the education sector and make education a money-making industry, Munir remarked.

TSSPLA Chairman Prof Muhammad Zafar Yar Khan echoed the views of Munir. “When the HEC discontinued the two-year degree programme and formulated a four-year degree programme, none of the decision makers considered that those students who cannot afford hefty amounts of fees will drop out,” Zafar said, adding that thousands of students from working-class families would say goodbye to education as a result of the HEC’s policy.

On the phasing-out of the two-year degree programmes, the minutes of a meeting of the Academic Council of KU say that affiliated colleges were formed to share the burden of the varsity. “Abolishing college-level bachelors and masters programmes would mean that students will be forced to travel unnecessarily long distances and will make higher education even more out of the reach of the lower-middle class in Karachi, especially for female students,” the document read.

On Friday, the varsity appointed Prof Dr Anila Ambar Malik as the secretary of the affiliation committee to deal with the issue.

While addressing a press conference on February 4, the adviser to the Sindh chief minister on universities and boards, Nisar Ahmed Khuhro, termed abolition of the two-year degree programmes an attack on the provincial autonomy. He announced that the colleges and varsities in Sindh would continue with the two-year programmes under the Universities Act, 2018.

After Khuhro’s press conference, the provincial government mobilised the Sindh Higher Education Commission and its chairman Dr Asim Hussain approached the HEC to address the issue.

However, instead of convincing the HEC, Dr Asim was apparently convinced by the commission as he later issued a statement saying that he was not against the four-year degree programme.

Also in defiance of the Sindh government’s stance, the University of Sindh on Friday announced provisional admissions to associate degree programmes in its affiliated colleges.

The Sindh chapter of the Association of Private Sector Universities Pakistan also welcomed the HEC’s undergraduate policy in a statement.