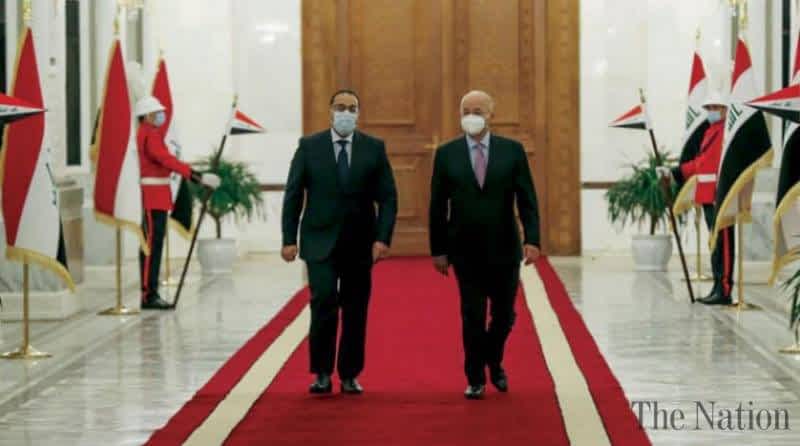 Egyptian Prime Minister Mostafa Madbouly arrived in Baghdad on an official visit on Saturday to hold talks with Iraqi leaders and sign a number of memorandums of understanding to enhance cooperation between Baghdad and Cairo.

Madbouly, heading a high-level delegation, arrived in Baghdad airport around noon and was received by his Iraqi counterpart Mustafa al-Kadhimi, according to a statement by al-Kadhimi’s media office.

The two prime ministers chaired the meeting of the Iraqi-Egyptian High Joint Committee which resulted in the signing of 15 memorandums of understanding by ministers from both sides in the fields of transport, water resources, health, environment, justice, investment, housing, construction, industry, trade and finance, the statement said.

Later in the day, al-Kadhimi said in a joint press conference with his Egyptian counterpart, that “Iraq has the desire to build better relations with Egypt and a strategic partnership because it is essential for regional security and stability.”

“We want to develop tripartite cooperation within the framework of economic integration and strategic cooperation, especially in these circumstances in which we all face the coronavirus pandemic, the decline in oil prices, and the resulting economic and social challenges,” al-Kadhimi said.

Al-Kadhimi’s comment came as Baghdad and Cairo are seeking to build strategic cooperation, which is part of a tripartite partnership previously agreed upon by Cairo, Amman and Baghdad.

For his part, Madbouly said “today is a historic day” to the relations between the two countries, as the two sides have signed a number of memorandums of understanding and there would be a timeline for activating and implementing projects that would serve the interests of the two countries.”

He said that the two sides agreed to implement a number of projects by Egyptian companies through the mechanism of oil for reconstruction.

Later in the day, Madbouly met with Iraqi President Barham Salih and the two discussed latest regional developments as well as the Iraqi-Egyptian efforts to strengthen the tripartite cooperation with Jordan, and the importance of continuing all efforts to combat terrorism and extremism, according to a statement by the Presidency media office.