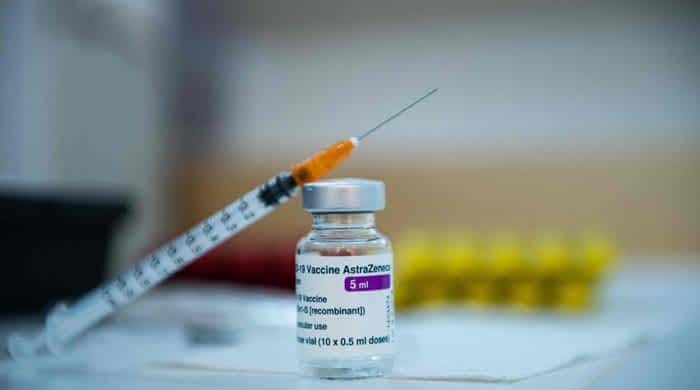 THE HAGUE: The EU’s medicines regulator on Tuesday backed the AstraZeneca’s coronavirus vaccine saying it was “firmly convinced” that the benefits outweigh potential risks.

The suspensions have provoked intense debate over whether it was prudent to put AstraZeneca inoculations on hold just as vaccination campaigns were beginning to gather pace.

Experts at both the World Health Organization and the European Medicines Agency (EMA) met Tuesday to discuss the vaccine, with the European organisation expected to publish conclusions Thursday.

While millions of doses of the vaccine developed with Oxford University have been administered, small numbers of people have developed blood clots, prompting countries including the EU’s three largest nations — Germany, France and Italy — to suspend injections.

The EMA insisted that countries should continue using the vaccine.

“We are still firmly convinced that the benefits of the AstraZeneca vaccine in preventing COVID-19 with its associated risk of hospitalisation and death outweigh the risk of these side effects,” EMA chief Emer Cooke said Tuesday.

Cooke noted however that the regulator was “looking at adverse events associated with all vaccines”.

France and Italy welcomed the news.

The preliminary statements from the EMA “are encouraging,” read a joint statement from French President Emmanuel Macron and Italian Prime Minister Mario Draghi.

French Prime Minister Jean Castex vowed he would be vaccinated “very quickly” with the AstraZeneca vaccine to give the public confidence in the jab if it is ruled as safe by the EU medicines agency.

Castex also said that new restrictions could be put in place for the Paris region, such as the weekend lockdowns already imposed in the Nice and Calais regions.

“We are in a worrying and critical situation and, clearly, measures of the type that have been used in other parts of the territory are on the table,” he told BFM TV in a live interview.

COVID, not jab, to blame?

In Britain, which has administered more than 11 million AstraZeneca doses, experts see no evidence of more frequent blood clots among the inoculated.

Prime Minister Boris Johnson wrote in The Times newspaper that the shot “is safe and works extremely well”.

One British scientist argues that COVID-19 itself — and not the vaccine — could be to blame, as it was known to cause such problems.

The “very likely explanation of at least some of the clotting disorders seen are a result of COVID-19 rather than the vaccine”, said Stephen Evans, professor of pharmacoepidemiology at the London School of Hygiene & Tropical Medicine.

“Hence, even if there were a problem, acknowledged to be very rare with the AZ vaccine, the overall benefit would be so much greater than any speculative harm,” he added.

Coronavirus deaths across Europe meanwhile passed the 900,000 mark, making it the worst-hit global region in absolute terms, according to an AFP tally.

In the world’s hardest-hit country, the United States, former president Donald Trump encouraged his Republican supporters — one of the main groups resistant to COVID-19 vaccines — to get their shots.

“I would recommend it,” Trump said in a late Tuesday interview on Fox News.

This was Trump’s most explicit endorsement for the national mass vaccination campaign since he left office in January.

Brazil, where President Jair Bolsonaro appointed his fourth health minister since the pandemic began, has the world’s second highest Covid-19 infection rate after the United States.

More than 382 million doses of vaccine have been administered globally, the vast majority in wealthier countries while many poorer nations have yet to receive a single jab.

AstraZeneca’s shot, among the cheapest available, was billed as the vaccine of choice for poorer nations and the clot reports have had an impact beyond Europe.

Countries that have halted or delayed the rollout range from Indonesia and Venezuela to Sweden and the Netherlands.

But Canadian Prime Minister Justin Trudeau urged his citizens to get the AstraZeneca shot. A scientific committee advising the government even extended its recommendation for AstraZeneca’s jab to people aged 65 and over.

And Thai Prime Minister Prayut Chan-O-Cha was himself injected as his country lifted its own AstraZeneca suspension.

The pandemic spurred unprecedented efforts to develop vaccines, with a number of successful options now available.

On Tuesday Brussels sealed a deal to step up deliveries of 10 million doses of the Pfizer/BioNTech vaccine, now scheduled to arrive in the EU before July rather than in the third quarter.