Expressions of inner selves through ‘The Skin We Live In’ 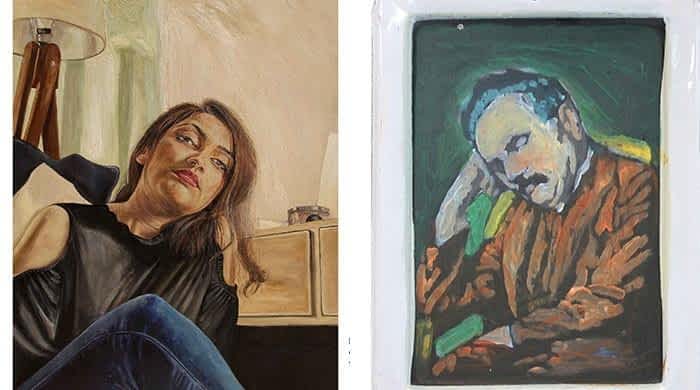 A four-person show titled “The Skin We Live In” at Canvas Gallery, Karachi showcased contemporary artists concerned with expression of their inner selves in relation to the external world, creating visual vocabularies that transcend the boundaries of language and manifesting in unique socio-cultural perspectives.

For most people slates are reminders of schools days but Ahmed Ali Manganhar used these slates as a medium and painted on them his journey of learning in different institutes. But after some time he began reflecting various cultural stories and social behaviours through his acrylic slate paintings. These slates serve as educational, emotional, spiritual and recreational means of expression for him.

He trapped different images between positive and negative spaces on the slates thus telling stories of spirits, art and power in his own way. Mostly diptych his work depicted human figures from history, art and culture and from daily life sometimes presenting comparison but at other times they were related to each other through time and history.

Amna Rahman divided her works in two parts – the world inside and the world outside. This way she tried to find reality which is often distorted by fiction or anecdotes. Her works reflected ideas and notions which people conceive according to their circumstances and experiences. Her subjects, female figures were her close friends therefore the portraits in oils were of personal nature as they revealed the impressions that subjects left on her.

In other phases of her works she used dogs as a subject because these animals act real and cannot not hide their emotions. Dogs in various parts of our country exterminated through several campaigns and to Amna, it is emotional indifference.

Anusha Ramchand Novlani talked about polar opposites in her works like black and white, good and evil, rich and poor. Although these realities co-exists in our society but they are far apart from each other. This situation sometimes create polar personalities and we could not differentiate between reality and fake.

She highlighted the universal language of social media symbols as a medium to bridge divisions and differences. But art is the only language which helps people communicate although they stand on two different social spectrums.

Yaseen Khan similarly focuses on the confusion created by the communication gap in our cultural melting-pot, yet does so with a visual vocabulary firmly rooted in vernacular tradition. Coming from Sindhi and Pakhtun background he used Chamak patti to express his concerns about society where different cultural groups experience communication gaps in our country.

'Megan Is Missing' starts trending on Twitter: Here's why