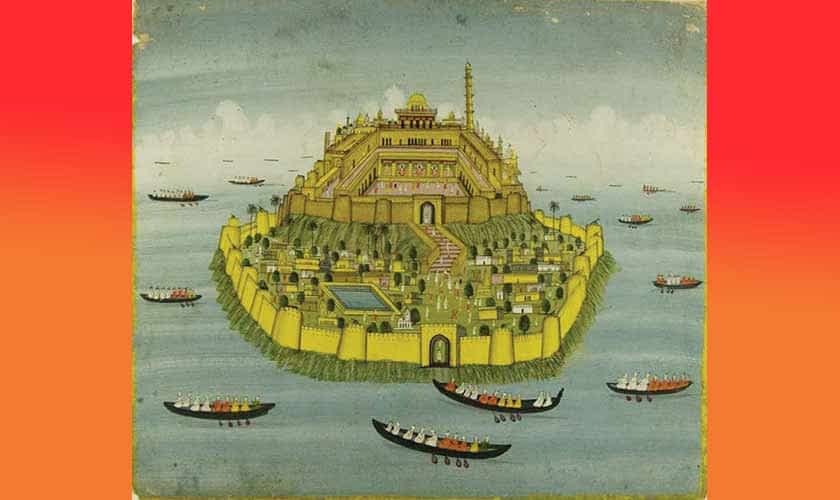 In art, perspective is perhaps the biggest and most successful lie that we believe in. The conflict between our vision and knowledge becomes obvious when we, say, reduce the height, width and precision of distant poles of a bridge while drawing them on a piece of paper. Knowing full well that all pipes are of equal dimension. The same happens in photography where the camera also ‘distorts’, presenting a depth of space that captures a momentary view and not a permanent fact.

The dichotomy between the ‘seen’ and ‘known’ is difficult to resolve. Hence, in children’s drawings or those produced by untrained hands, ‘truth’ of the visible world is transcribed. But today, we believe in an illusion — the linear or mathematical perspective that was discovered around 1415 by the Italian architect Filippo Brunelleschi. Beyond Renaissance Europe, people were familiar with this ‘disorder’. So several cultures dealt with the issue of perspective differently.

In the subcontinent, the idea of space remained a peculiar one, because from the earliest known examples such as Ajanta frescos and Pala paintings to later Mughal miniatures, space in art hardly corresponds to our optical experience. It is flattened, extended, constructed, reorganised, piled up or layered. Here, rendering of buildings is unlike the structures represented in Renaissance art and later on. In Indian miniatures, palaces, forts, interiors, courtyards, balconies, roofs, stairs, railings, grills are modified, simplified, stylized or observed from separate eye levels within a single painting.

Perspectives, the exhibition curated by Dr Caroline Widmer at the Museum Rietberg, Zurich (September 9, 2020 to January 10, 2021), maps various approaches towards perspective in Indian art. The comprehensive show offers not only the practice of making multiple perspectives, it also presents shifts in conventions — depending on the period, region and contact with outside cultures.

The exhibition is a remarkable document — almost an essay on how space was conceived by local painters, parallel to the Western invention of ‘perspective’, which is esteemed as the ‘truthful’ representation of the solid world. A belief that was as arbitrary as the confidence in black and white photographs till it was shattered by colour photography, when everyone suddenly realized that humans, events, situations, and scenarios were not made up of varying shades of greys.

However, for centuries, the West has been selling the idea (first through trading companies followed by invading armies) that the European model of perceiving the world is perfect, intelligent and natural. A notion infused through art education in regions under its rule. Thus, artists from former colonies judge miniature painting as raw, unsophisticated, unpolished, due to its ‘confused’ sense of delineating space. One wonders what would have happened to Brunelleschi’s perspective if the war was decided in favour of Indian monarchs, or for that matter Mughal, Persian or Ottoman armies had conquered mainland Europe.

We all know that past is already cast. If history is the account of victors, culture is the dessert for conquerors. The Perspectives exhibition reminds us of other possible and potent ways of transcribing reality.

In the subcontinent, the idea of space remained a peculiar one, because from the earliest known examples such as Ajanta frescos and Pala paintings to later Mughal miniatures, space in art hardly corresponds to our optical experience.

A total of 64 works, displayed in the three rooms of Park-Villa Rieter section of the Museum, range from 15th century (A Tithankara is Ripping His Hair Ritually, Gujrat) to 1875-1900 (Krishna in Vraj, Rajasthan), projecting a diversity, reinforcing the fact that tradition is not one solid, static and saturated entity. It is a flowing river, which takes in alien particles, absorbs them, modifies them or dismembers them. Also, the course of a river is never the same. Let’s say the Indus at Skardu is not what you find it to be in Sukkur.

Walking through the show, one can discern various interpretations of perspective in Indian miniature paintings of different schools, styles and patronage. In Mughal and Pahari paintings you notice the practice of ‘pile-up perspective’, also for a practical reason: several painters of Mughal karkhanas (workshops/ ateliers) were working on one painting, hence each introduced a separate angle in devising three-dimensional space. A plausible reading, but not compelling or convincing enough, because presumably all participants followed a single layout (khaka) of their shared miniature.

Arguably, the perspective in miniature painting was about perceiving the tangible world not entangled in ephemeral and sensory encounters, but as a calculated cartography of eternal reality. Thus the effort was not to record what was gathered from one view, and lost or changed by shifting one’s position; because pictures based on those momentary experiences were regarded as untrue. Centuries ago “Plato already described them as ‘illusionary images’ that attempted to simulate nature without considering the things as they really were. A human being is not smaller simply because he is standing further away, it just looks so”.

The multiple or piled-up perspective in Indian miniature paintings is not disjointed from the canon of constructing human figure in ancient Egyptian art. Like body parts picked and joined to convey an ideal image of a human being, space in miniature paintings was fabricated as an essential piece of knowledge. In the exhibition at Museum Rietberg, one gathers how the idea of space is spread in different directions — from Mughal period to Pahari school, and ending in scenes influenced and adapted from European engravings of diverse locations (for example View on Piazza San Marco in Venice).

In some of these exhibits, one can see how the artists have managed architecture and objects: either a tilted turret to suggest the left-side of a magnificent building (Maharana Jagat Singh II is Rowed to His Island Palace, Rajasthan, c1750). Or the view of a city on the river with houses composed like a jigsaw (View on Benares, Pahari. 1850-1875). Or inclusion of a square or rectangle carpet (as if looked from top) within an otherwise receding environment. In many paintings, the Western perspective is reversed, so that things that are near are narrower, compared to distant objects which expand. All these elements reiterate that miniature painting is not a window into space but a flat surface, adhering to its physical reality (a parallel can be witnessed in the paintings of Paul Cezanne, and of Cubists’).

The idea of flatness was further enhanced through the element of decorativeness in these miniatures. Paintings which, as Arthur C Danto describes, were prepared as “objective memories….. of great occasions”; but “pictures were required to do more than that: they were also meant to celebrate the occasions they depicted. Hence the intricacy of design and the luminosity of their colours”. Numerous examples of this attitude can be observed in the way flat colours are applied, strong and vibrant hues are preferred, intricate detail is infused next to large expanses in compositions.

In a sense, all these views: of inner, outer and combined spaces narrate the reality of perception instead of the perception of reality. Romanian-born American writer and holocaust survivor Elie Wiesel quoted Kafka’s observation “that it is possible to talk with God but not about God”. In the same way, painters of these miniatures were embracing reality, not embarrassing it.