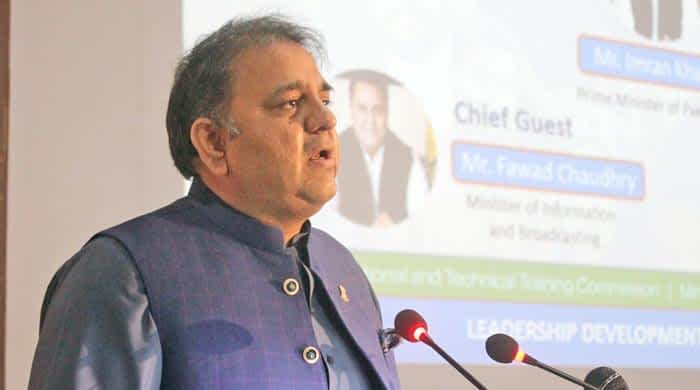 Federal Minister for Information and Broadcasting Fawad Chaudhry addressing an event in Islamabad, on May 26, 2021. — Online/File

Fawad, speaking during Geo News’ programme “Geo Pakistan”, said: “I cannot immediately comment on the cause of the crash … rescue operations are underway at the site and a preliminary investigation has been launched.”

The minister questioned what can the minister do, adding that he (Swati) can only explain the flaws and the solution for them.

The information minister said once the ML-1 project completes, it will cause a reduction in accidents.

Fawad said the problems the incumbent government faces are due to the policies of the previous governments.

“They remained in power for such an extended period … what did they do to rectify the issues?”

Meanwhile, Rafique, responding to the crash, said in the last three years, the incumbent government has just forwarded documentation, and not done any real work.

“If funds are not released timely, then passenger safety will remain compromised,” the former railways’ minister said. “The interior and information ministers are trying to blame me for the accident … In the last three years, this government has not done an ounce of work.”

The railways are in shambles during this government’s tenure, he said, adding they had run trains more than the requirement that led to the institution facing a deficit.

Rafique said this was not the time to shift blame, as he called upon the government to not play with the lives of people travelling via railways.

The former minister challenged the government to compare the budget allocated for railways during the PML-N’s government with their allocation.

“You should not expect results if you do not invest in railways,” Rafique added.

Over 2.18B coronavirus vaccine shots given worldwide